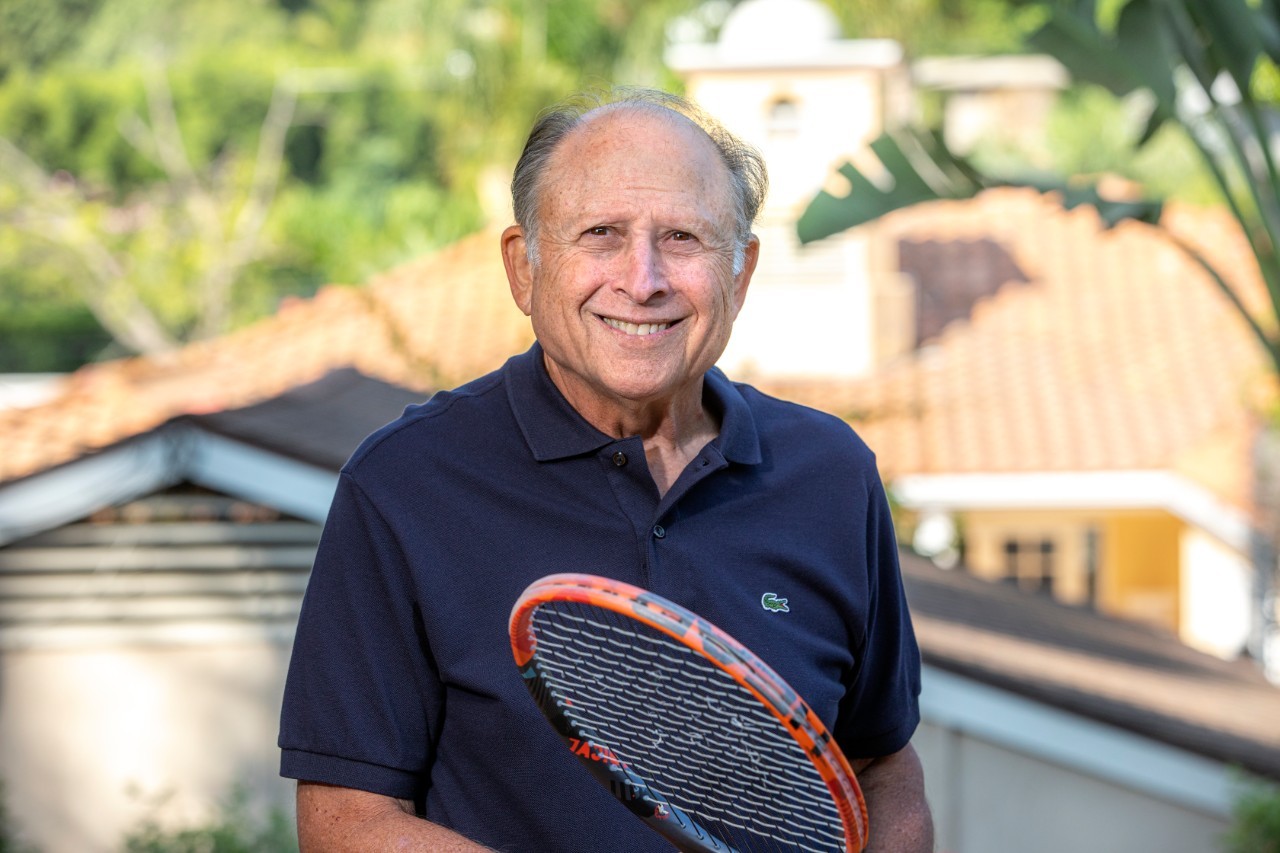 It started on the tennis court, in 2016. A lunge for the ball, an awkward fall, and then sore ribs with subsequent backhands. At least that’s what Martin Snyder thought was the cause of his pain.

He was wrong. An X-ray and further imaging over the ensuing weeks revealed that the slim and fit psychotherapist, then 73, had mesothelioma, a rare cancer usually caused by asbestos exposure.

Looking back on that period of diagnostic tests and doctors’ appointments, Snyder recalls telltale cancer signs: loss of appetite and significant weight (40 pounds). He wanted to share his story for Mesothelioma Awareness Day, Sept. 26, to let others know that the symptoms he experienced should be reviewed by a physician.

“I lost energy on the tennis court, where I typically played two to three hours at a time,” Snyder said. “I usually could run the court like a teenager, playing with guys in their 20s and 30s. They asked how I could play that way in my 70s.”

Fatigue is one of several symptoms associated with mesothelioma, a cancer that commonly starts in cells in the linings of the chest or abdomen. Pleural mesothelioma, accounting for 80%-90% off all cases, affects the pleura, which covers the lungs and the space surrounding the lungs. Making up 10%-15% of cases, malignant peritoneal mesothelioma affects the peritoneum, which lines the inside of the abdomen and covers many of the organs there.

Additional symptoms include chest or abdominal pain, shortness of breath, fluid buildup, fever, night sweats and weight loss, according to the American Cancer Society. The average time for symptoms to develop is 35-40 years after asbestos exposure.

Mesothelioma is rare in the United States and usually is lethal. About 3,000 new cases of the disease are diagnosed each year. Typical life expectancy is up to two years after diagnosis, although that can improve with treatment, said Jeremy Lorber, MD, an oncologist at Cedars-Sinai Tower Hematology Oncology Medical Group, who is treating Snyder.

Mesothelioma begins when asbestos fibers damage lung cells and result in scar tissue and/or lung cancer, according to the cancer society. Peritoneal mesothelioma forms in the abdomen when inhaled asbestos fibers are coughed up and then swallowed. Rarely, a mutation, or change, in the gene called BAP1 – which is associated with the BRCA1 gene mutation – can be passed down in families and has been linked to mesothelioma.

“Most mesothelioma cases do not carry this mutation,” Lorber said. “But it did cause Dr. Snyder’s peritoneal mesothelioma.” The psychotherapist also was treated for prostate cancer at age 66, a disease sometimes associated with the BRCA1 gene mutation. His brother also had BRCA1-associated cancers.

Snyder’s case had other twists and turns. Following his 2016 diagnosis, he underwent surgery to remove the cancer – typically not an option for mesothelioma patients – followed by standard chemotherapy treatments. He was disease-free for three years.

“Patients like Dr. Snyder who respond to and tolerate treatment can enjoy a good quality of life, and he has,” Lorber said. “He’s continued to play tennis, travel and maintain a positive attitude, even as he has faced fresh health challenges.”

In 2019, a CT scan revealed that the mesothelioma had returned. Snyder underwent surgery again, followed by chemotherapy and immunotherapy. Earlier this year, a scan revealed that the cancer had spread. He currently is enrolled in a large precision-medicine clinical trial called the Targeted Agent and Profiling Utilization Registry, or TAPUR trial. Treatment is based on a patient’s gene mutation, Lorber said. Snyder is tolerating his treatment well and is stable, he added.

Snyder attributes his resilience and strong quality of life to his healthful lifestyle, involvement with his doctors in his treatments and an unwavering positive attitude, which he recommends his fellow cancer travelers embrace. He also suggests that patients research their cancer, as new information and treatments continue to emerge.

“I’m a rare bird – I have a rare type of a rare cancer,” Snyder said. “I inherited a cancer gene mutation from my mother, but she also gave me my handsome genes! I refuse to feel sorry for myself, and I continue to work, hit the tennis court, hike and work out. When I do die, it will be with a smile on my face.”

Read about lung cancer screening on the Cedars-Sinai blog: Should I Get a Lung Cancer Screening?