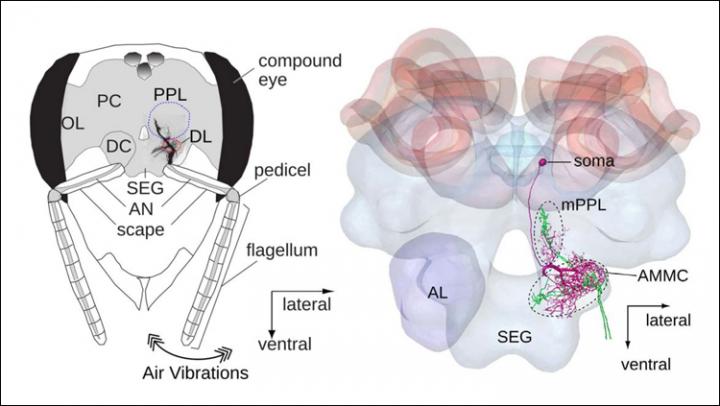 Changes in a vibration-sensitive neuron may equip forager honeybees for waggle dance communication, according to research recently published in

Forager honeybees share information about the location and value of food sources by moving their body from side to side and beating their wings. The observing bees interpret the waggle dance through sensory organs that send the information to vibration-sensitive neurons, including DL-INT-1.

After developing from an egg, young adult honeybees emerge from their cell and begin learning their social position. The honeybees that become foragers learn the waggle dance, which may require further brain development. To explore this, Ajayrama Kumaraswamy and colleagues at Ludwig-Maximilians-Universität München, Fukuoka University, and University of Hyogo recorded the electrical activity of DL-INT-1 neurons in young adult and forager honeybees and then created computer simulations and three-dimensional models of the neurons.

In specific regions of DL-INT-1 neurons, the older bees had less dense branching compared to the younger bees. Additionally, the neurons in older bees demonstrated enhanced signaling and more precise connections to other brain regions. These findings suggest that important adaptations occur in the honeybee during the transition into the forager role, which allow them to effectively communicate via the waggle dance.

*A preprint of the manuscript is available on

for full-text PDF and to join SfN’s journals media list.

, the Society for Neuroscience’s open-access journal launched in 2014, publishes rigorous neuroscience research with double-blind peer review that masks the identity of both the authors and reviewers, minimizing the potential for implicit biases.

is distinguished by a broader scope and balanced perspective achieved by publishing negative results, failure to replicate or replication studies. New research, computational neuroscience, theories and methods are also published.

About The Society for Neuroscience

The Society for Neuroscience is the world’s largest organization of scientists and physicians devoted to understanding the brain and nervous system. The nonprofit organization, founded in 1969, now has nearly 37,000 members in more than 90 countries and over 130 chapters worldwide.

This part of information is sourced from https://www.eurekalert.org/pub_releases/2019-08/sfn-hbd082019.php