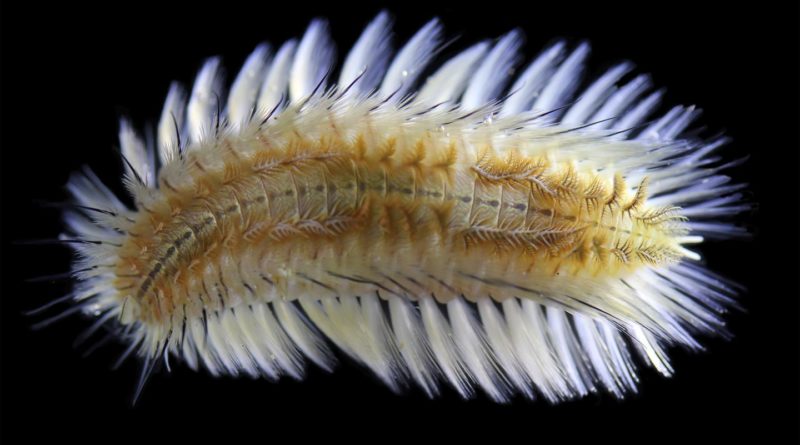 . It is the fourth named species to be added to the fireworm genus

during the last century. The team also identified

as the fireworm species that caused the outbreak in Hong Kong last year. The discovery shows how little people know about the biodiversity of this group of animals.

Fireworms are common in tropical and subtropical shallow-water ecosystems. They are members of the polychaete worm family Amphinomidae. “Poly” in the word polychaete means “many”, while “chaete” means “hairs” or “bristles”. Each body segment of a fireworm has a pair of fleshy outgrowths that bear many chaetae. These chaetae contain neurotoxins that can produce a painful burning sensation around the area of contact with human skin.

In Hong Kong, individual fireworms have often been sighted underwater by divers, but since last summer swarms of them have been seen near swimming beaches in Tuen Mun and Tsuen Wan, threatening many beachgoers.

Prompted by the recent outbreak of fireworms, Professor Qiu Jianwen, Associate Head and Professor of the HKBU Department of Biology, and his research team collected specimens from local swimming beaches and shallow-water sandy bottoms. Through detailed studies, the team reported

The HKBU team collected the undescribed fireworm specimens from the sandy bottom of a coral community in Sharp Island, Sai Kung. These specimens are fusiform in shape, measuring 28 mm to 39 mm long and 7 mm to 14 mm wide, with around 30 segments. They can be distinguished by the specific colour pattern on their mid-dorsum.

. He said: “This is the first time that

has been identified. Bimaculata means two black spots in Latin. We gave it this name because each segment of their body has two dark spots arranged one behind the other.”

Based on the photos of fireworms posted on the internet by some local scuba divers, the team believes that this species has been recorded at other eastern Hong Kong locations before, including the waters around Tung Ping Chau.

Identifying the culprits behind the recent outbreaks

The team also collected fireworm specimens from two beaches in Tsuen Wan, and the subtidal waters of Tolo Harbour during an outbreak in June 2018 in Hong Kong. To identify these species, the team borrowed the type specimen deposited in the Natural History Museum in London for examination. Even though the main body of the type specimen is missing, based on the morphology of the chaetae and cirri on a parapodium (foot), the team could still recognise that the specimens collected in Hong Kong during the outbreak are

), on each segment, there is a dark mark in the shape somewhat of the Greek ‘Y’ shaped pigmentation”. This also matches the pigmentation pattern of the specimens they collected during the outbreak.

are fusiform in shape, measuring 38 mm to 97 mm long and 8 mm to 20 mm wide, excluding chaetae. The team believes that

are widespread in the South China Sea.

Around the world, there are 28 recognised fireworm

species. Among them, two species, including

, have been confirmed to exist in Hong Kong by this HKBU research. Polychaetes are common animals in various types of ecosystems, including coral reefs, mangrove forests and the muddy seabed. They play a vital role in marine food chains.

This part of information is sourced from https://www.eurekalert.org/pub_releases/2019-08/hkbu-hbd082719.php