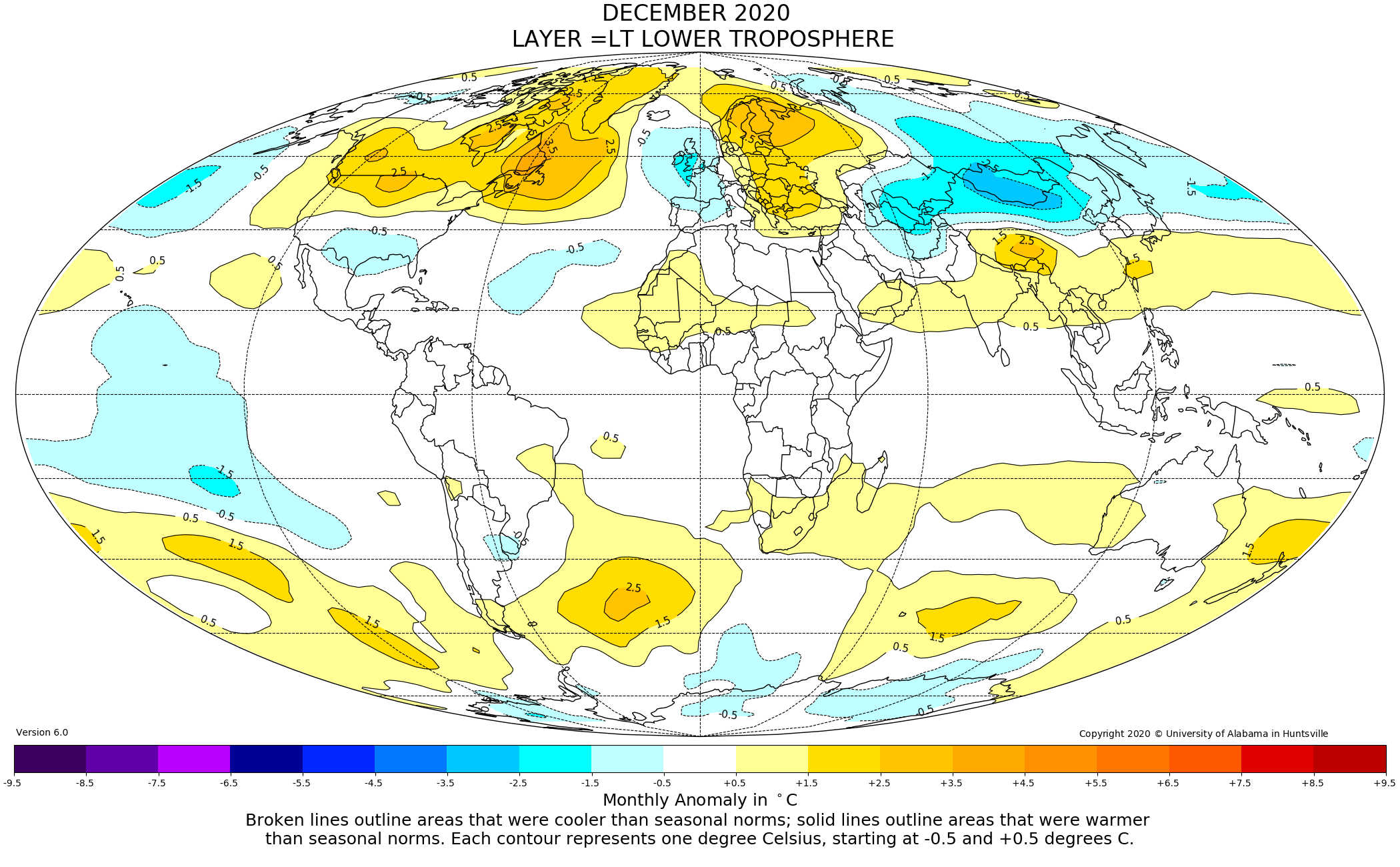 That is a tremendous amount of net cooling of the planet’s atmosphere. The Northern Hemisphere experienced considerable cooling too, dropping from 263.84 K to 261.70 K which is 0.46 K (°C) more than normal.

The Canadian provinces of Labrador and Newfoundland experienced the globe’s warmest departure from average at +4.1 °C (+6.2 °F).  As is usual, when it’s very warm in one place, there are usually a series of alternating cold and warm regions in the same latitude belt.  That was true this month, with the coldest absolute departure was far to the east in Mongolia at -3.3 °C (-5.9 °F).

The global map for December displays the typical scattering of warmer and cooler than average temperatures.  Besides Canada and Greenland it was also above average in Scandinavia, SW China, and various areas of the southern oceans.  Cooler than average temperatures were found in N China, E Russia to the North Pacific Ocean, and a large area where the La Niña is evident in the central tropical Pacific.

The conterminous U.S. experienced above-average temperatures being +0.56 °C (+1.01 °F) above the norm due to warmth in the northern tier of states which more than compensated for the cooler than average temperatures in the southern tier.  Alaska was a bit cooler than the lower 48, so that the 49-state mean temperature departure was a bit lower than the 48-state value being +0.49 °C (+0.88 °F).   [We don’t include Hawaii in the US results because its land area is less than that of a satellite grid square, so it would have virtually no impact on the overall national results.]

Part of the warmth of 2020 came from the modest El Niño during the first half of the year whose atmospheric effects lingered as well as a continuously very warm North Pacific Ocean (see Figure for 2020).  Additionally, Russia, and to a lesser extent Europe, experienced much above normal temperatures.  These natural, regional influences also occurred within a general atmospheric warming likely related at least in part to extra greenhouse gas concentrations.

The map of gridpoint trends for December 1978 through December 2020 (see Figure) indicates broad warming almost everywhere north of the southern polar regions.  Because the mean warming rate is +0.14 °C/decade, the contour labeled 0.15 (separating yellow from orange) is a quick way to see areas warming faster or slower than the globe as a whole.  Areas warming more rapidly than the globe are seen in the southern subtropical latitudes, much of Eurasia, the North Pacific through the Arctic and much of North America.

Special note:  We will soon shift the baseline reference period to 1991-2020 in accordance with the World Meteorological Organization guidance.  As a result, the anomalies will shift a bit, but the trends will remain as they are.

To-Do List: There has been a delay in our ability to utilize and merge the new generation of microwave sensors (ATMS) on the NPP and JPSS satellites.  As of now, the calibration equations applied by the agency have changed at least twice, so that the data stream contains inhomogeneities which obviously impact the type of measurements we seek.  We are hoping this is resolved soon with a dataset that is built with a single, consistent set of calibration equations.   In addition, the current non-drifting satellite operated by the Europeans, MetOP-B, has not yet been adjusted or “neutralized” for its seasonal peculiarities related to its unique equatorial crossing time (0930).  While these MetOP-B peculiarities do not affect the long-term global trend, they do introduce error within a particular year in specific locations over land.

As part of an ongoing joint project between UAH, NOAA and NASA, Christy and Dr. Roy Spencer, an ESSC principal scientist, use data gathered by advanced microwave sounding units on NOAA, NASA and European satellites to produce temperature readings for almost all regions of the Earth. This includes remote desert, ocean and rain forest areas where reliable climate data are not otherwise available.  Drs. Danny Braswell Rob Junod assist in the preparation of these reports.