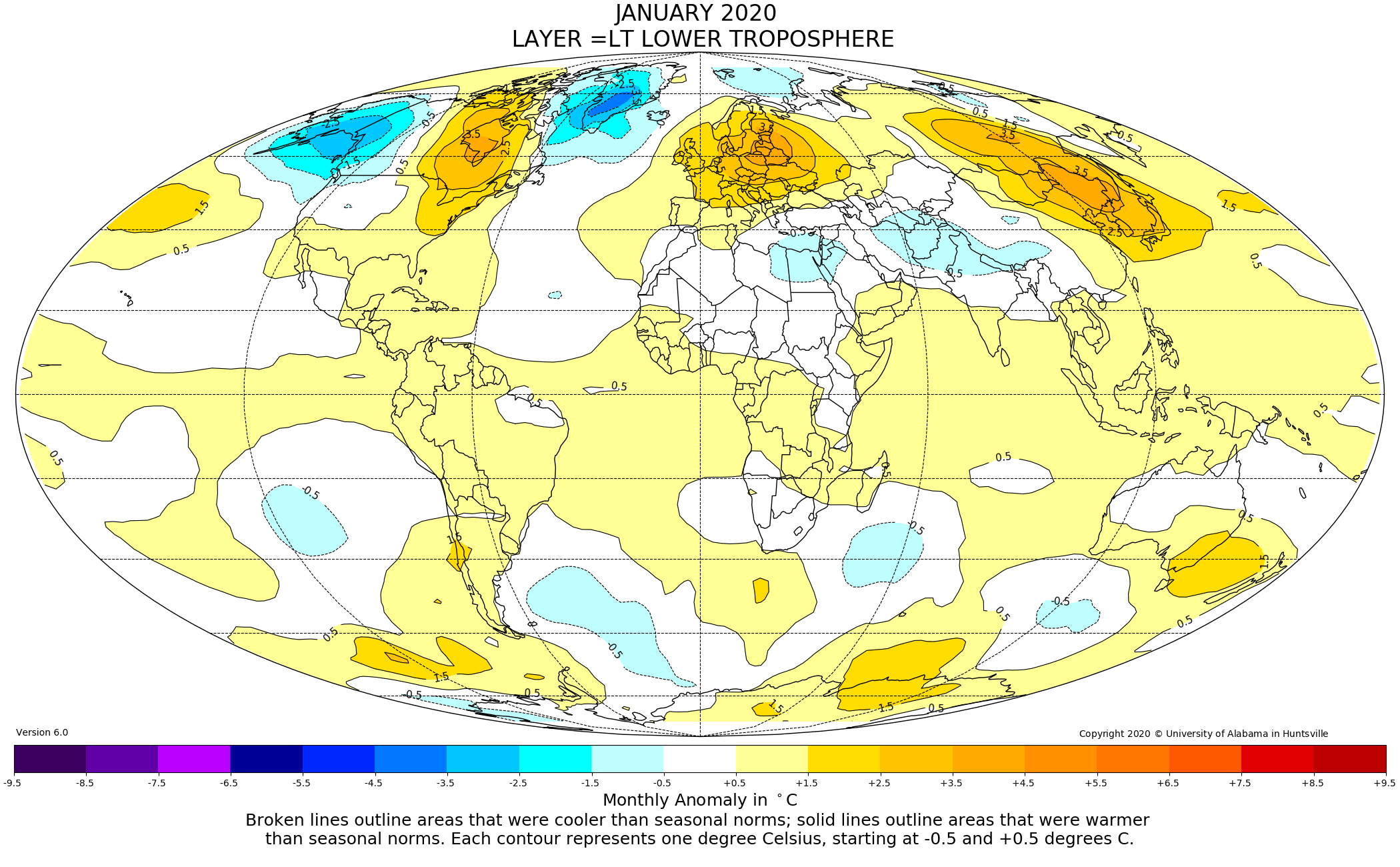 For the large-scale, area-averaged temperatures, January 2020 was essentially a repeat of December 2019 and globally, tied January 2016 for the warmest January in the 42 Januaries in the satellite record at +0.56 °C (+1.01 °F). Temperatures for the Globe, Northern Hemisphere, Southern Hemisphere and Tropics were only hundredths of a degree different compared with December. (As subareas of the globe, the NH, SH and Tropics did not experience their individual record warm values.) The global trend since December 1978 continues to be +0.13 °C per decade. Accounting for the cooling influence of volcanoes in 1982 and 1991 as well as the influence of the El Niño/La Niña cycle, the global trend without these natural, ephemeral phenomena is about +0.09 °C per decade.

The conterminous U.S. as a whole experienced a warmer-than-average December (+0.70°C, +1.26 °F). However, it was much cooler than average in Alaska, so that the 49-state area’s temperature departure was a near-normal +0.27 °C (+0.49°F). We don’t include Hawaii in the US results because its land area is less than that of a satellite grid square, so it would have virtually no impact on the overall national results.

Globally, locations with sustained much warmer-than-average temperatures for the month appeared over the northeastern portions of Europe, China and North America. The month’s warmest departure from seasonal norms was over Estonia at +4.3 °C above the 1981-2010 average.

The coldest departures for the season occurred over Alaska and Greenland where in the south-central area of the latter, near Sermersooq, a value of -4.1 °C was recorded. As is often the case in the winter hemisphere, the warmest and coldest temperatures are geographically relatively close as is the case this month where only 3,000 km separate the locations of the two extremes.

As noted over the past several months in this report, the drifting of satellites NOAA-18 and NOAA-19, whose temperature errors were somewhat compensating each other, will be addressed in this updated version of data released from March 2019 onward. As we normally do in these situations we have decided to terminate ingestion of NOAA-18 observations as of 1 Jan 2017 because the corrections for its significant drift were no longer applicable. We have also applied the drift corrections for NOAA-19 now that it has started to drift far enough from its previous rather stable orbit. These actions will eliminate extra warming from NOAA-18 and extra cooling from NOAA-19. The net effect is to introduce slight changesfrom 2009 forward (when NOAA-19 began) with the largest impact on annual, global anomalies in 2017 of 0.02 °C. The 2018 global anomaly changed by only 0.003°C, from +0.228°C to +0.225°C. These changes reduce the global trend by -0.0007 °C/decade (i.e. 7 ten-thousandths of a degree) and therefore does not affect the conclusions one might draw from the dataset. The v6.0 methodology is unchanged as we normally stop ingesting satellites as they age and apply the v6.0 diurnal corrections as they drift.

There has been a delay in our ability to utilize and merge the new generation of microwave sensors (ATMS) on the NPP and JPSS satellites. As of now, the calibration equations applied by the agency have changed at least twice, so that the data stream contains inhomogeneities which obviously impact the type of measurements we seek. We are hoping this is resolved soon with a dataset that is built with a single, consistent set of calibration equations. In addition, the current non-drifting satellite operated by the Europeans, MetOP-B, has not yet been adjusted or “neutralized” for its seasonal peculiarities related to its unique equatorial crossing time (0930). While these MetOP-B peculiarities do not affect the long-term global trend, they do introduce error within a particular year in specific locations over land.

As part of an ongoing joint project between UAH, NOAA and NASA, Christy and Dr. Roy Spencer, an ESSC principal scientist, use data gathered by advanced microwave sounding units on NOAA, NASA and European satellites to produce temperature readings for almost all regions of the Earth. This includes remote desert, ocean and rain forest areas where reliable climate data are not otherwise available. Research Associate Rob Junod assists in the preparation of these reports.