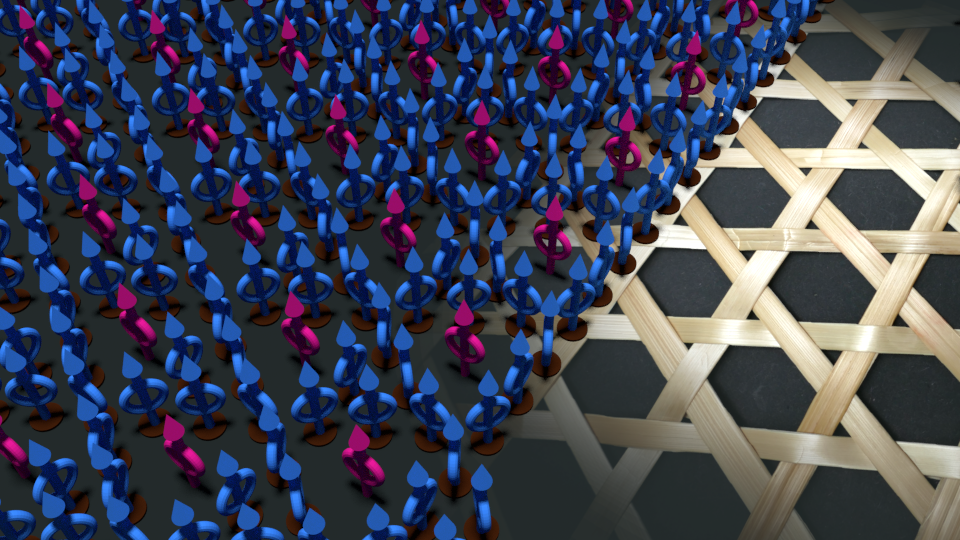 The properties of high-temperature superconductors can be tailored by the introduction of artificial defects. An international research team around physicist Wolfgang Lang at the University of Vienna has succeeded in producing the world’s densest complex nano arrays for anchoring flux quanta, the fluxons. This was achieved by irradiating the superconductor with a helium-ion microscope at the University of Tübingen, a technology that has only recently become available. The researchers were inspired by a traditional Japanese basket weaving art. The results have been published recently in “ACS Applied Nanomaterials” a journal of the renowned “American Chemical Society”.

Superconductors can carry electricity without loss if they are cooled below a certain critical temperature. However, pure superconductors are not suitable for most technical applications, but only after controlled introduction of defects. Mostly, these are randomly distributed, but nowadays the tailored periodic arrangement of such defects becomes more and more important.

Traps and cages for magnetic quantum objects in superconductors
A magnetic field can only penetrate in quantized portions into a superconductor, the so-called fluxons. If superconductivity is destroyed in very small regions, the fluxons are anchored at exactly these places. With periodic arrays of such defects, two-dimensional “fluxon crystals” can be generated, which are a model system for many interesting investigations. The defects serve as traps for the fluxons and by varying easily accessible parameters numerous effects can be investigated. “However, it is necessary to realize very dense defect arrangements so that the fluxons can interact with each other, ideally at distances below 100 nanometers, which is a thousand times smaller than the diameter of a hair,” explains Bernd Aichner from the University of Vienna.

Particularly interesting for the researchers are complex periodic arrangements, such as the quasi-kagomé defect pattern investigated in the current study, which was inspired by a traditional Japanese basket weaving art. The bamboo stripes of the kagomé pattern are replaced by a chain of defects with 70 nanometers spacings. The peculiarity of this artificial nanostructure is that not only one fluxon per defect can be anchored, but approximately circular fluxon chains are formed, which in turn hold a still free fluxon trapped in their midst. Such fluxon cages are based on the mutual repulsion of fluxons and can be opened or locked by changing the external magnetic field. They are therefore regarded as a promising concept for the realization of low-loss and fast superconducting circuits with fluxons.