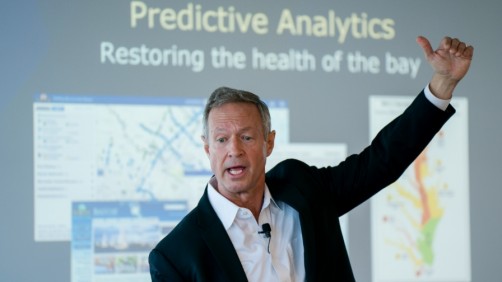 Last Friday marked the launch of the University of Virginia’s Data Science for the Public Good (DSPG) Distinguished Speaker Series with Martin O’Malley, former mayor of Baltimore and governor of Maryland, as its inaugural speaker.

The Distinguished Speaker Series is part of the DSPG Forum, a partnership among UVA’s Biocomplexity Institute, Darden School of Business, and Data Science Institute, as well as the Northern Virginia Technology Council. The forum builds on the Biocomplexity Institute’s highly successful and distinctive DSPG research portfolio that leverages cutting-edge public policy analytics and unprecedented data access, and serves as an honest broker to identify, visualize and understand the full complement of interests that affect the public good.

“The DSPG Forum was created to bring together community members from academia, government, industry and the general public to discuss how ‘doing data science’ can support evidence-based policymaking to enhance the quality of life in our communities,” said Sallie Ann Keller, director of the Arlington-based Social and Decision Analytics division at the Biocomplexity Institute. “We were thrilled to have Governor Martin O’Malley kick off our speaker series. He is someone who recognizes that we must strive to understand and contextualize data in order to provide value to policy makers and communities trying to solve complex social issues such as the ones he experienced during his time in public office.”

In his presentation, titled Smarter Government: the Data, the Map, and the Method, O’Malley laid out his before and after plans, and shared the secrets of his success to more than 100 people in attendance at the Darden Grounds in Arlington, Virginia.

Over his 30-year career in city and state government, O’Malley led dramatic change in the city of Baltimore and across Maryland. Among many other improvements, he helped make city neighborhoods safer, fixed roads and infrastructure, and cleaned up waterways.

These successes were not just happenstance, O’Malley said. As a public servant, O’Malley advocated for a results-oriented, new way of governing and leading, using the power of data and teamwork in his relentless pursuit to improve the health and well-being of his constituents.

In particular, O’Malley emphasized a “new way of leadership” that is entrepreneurial, performance-measured, interactive and — most of all — collaborative.

“It’s the ability to manage dynamic systems — regardless of scale — in order to achieve better results for individual people,” O’Malley said. “In this new way of governing, collaboration is the new competition.”

Over the span of 10 years as mayor of Baltimore, O’Malley led the biggest reduction in Part I crime of any major city in the United States. He achieved this by carefully using data and visual heatmaps to show the location of the most crime-ridden neighborhoods.

O’Malley said that you have to trust the data science that is put before you. “You need to have the courage to follow the evidence wherever it can go,” he said.

O’Malley also set forth a plan to improve roads across the state of Maryland. He shared the plan and milestones with the public every two weeks, making accountability very transparent and expected among his team. As a result, potholes were filled according to deadlines. He also was determined to clean up the Chesapeake Bay, and again shared all the evidence used in his clean-up plan with the public. From 2006 to 2017, the overall average grade for the waterway improved from a D+ to a C.

In each of these instances, O’Malley assembled cross-departmental and cross-organizational teams and asked them to develop data-driven metrics that would serve as evidence to monitor progress. Success was achieved through the combination of data and collaboration. It wasn’t a choice of one or the other, and it wasn’t about top-down directives, O’Malley said. Unlike previous modes of leadership, O’Malley said he does not believe it is still a “situational advantage” to lead from the “top of the pyramid.”

Instead, O’Malley advocates for a new way of leadership, one in which “smart leaders put themselves in the center of truths” and are surrounded by others who are knowledgeable in their various fields.

Keller agrees. “Data science is a team sport. In the type of transdisciplinary research we do at the Biocomplexity Institute, the power is not just in the data. It’s in our team’s ability to translate data based on each researcher’s area of expertise. At the intersection of this collaborative work lies the power to improve the impact of decision-making for the public good. Having the opportunity to bring this conversation and thinking to the broader community through the Data Science for the Public Good Forum is extremely gratifying and exciting.”

The next DSPG Forum event is the fourth annual DSPG Symposium, to be held 9 August at Darden’s Washington, D.C., area facility in the Rosslyn district of Arlington, Virginia. Special guest speakers include: Ron Jarmin, deputy director and COO of the U.S. Census Bureau, and Phil Bourne, director of UVA’s Data Science Institute and acting dean of the School of Data Science.

Visit the DSPG Forum website for more details and registration, and to learn about other forum events.

This story was originally published on the UVA Biocomplexity Institute website.