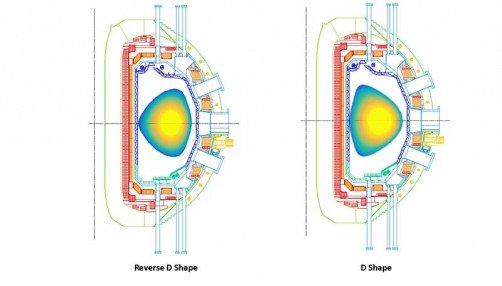 Mirrored D shape demonstrates surprisingly high pressures in a tokamak, indicating a shape change may be in order for next-generation fusion reactors.

To harness the reaction at the heart of our sun, fusion reactors must hold a large number of ions and electrons together at extremely high temperature and pressure. If the tokamak (the doughnut-shaped plasma-containing vessel) maintains the pressure high enough and long enough, a burning plasma forms that would be suitable for a power reactor. A team at the DIII-D National Fusion Facility recently achieved high-pressure operation of a plasma configuration known as a reverse D. They did so while maintaining a low pressure, stable region near the plasma edge that was inherently free of reactor-damaging disruptions. Their work turned conventional wisdom about plasmas on its head.

If scientists can confirm the beneficial properties of this new shape in even higher-pressure plasmas, this regime could significantly accelerate the realization of a fusion power plant.

Tokamaks are the leading magnetic configuration in the effort to achieve practical fusion energy. Plasmas in tokamaks have the shape of a torus, or doughnut. In early tokamaks, if you cut the doughnut in half and looked at the end or cross section, the plasma was in the shape of a circle. For modern-day tokamaks, the cross section typically has a somewhat triangular or D shape, with the narrow side of the shape pointing away from the center of the doughnut.

Physicists have long known that D-shaped plasmas are able to sustain much higher pressure than a circle-shaped plasma. This is a natural consequence of placing more plasma in a region of good curvature, that is, where any plasma perturbation is opposed by an increasing magnetic field. On the other hand, scientists have long thought that plasmas with a reverse D shape were not capable of maintaining those same pressures due to a larger fraction of the plasma residing in a region of bad curvature, that is, where a perturbation encounters a decreasing magnetic field.

A team of researchers at the DIII-D National Fusion Facility turned that conventional wisdom on its head recently when they achieved high-pressure operation of reverse-D plasmas while maintaining a low pressure, stable edge region inherently free of reactor-damaging edge localized modes, or ELMs.

High-confinement plasma regimes attain the high density and temperatures required to sustain thermonuclear reactions by developing steep pressure gradients near the edge of the plasma. However, applying so much pressure on a narrow region at the edge of a plasma leads to ELM instabilities—much like squeezing a balloon causes it to bulge outward around the fingers of a hand. Researchers must curtail these ELMs if commercial fusion energy is to become a reality.

The new shape, also known as negative triangularity, had long been thought of as an interesting sideline, but it wasn’t believed to hold much promise for applied fusion energy due to its supposedly lower pressure limits. Initially, scientists explored the reverse-D shape experimentally at the TCV tokamak in Switzerland with promising confinement performance. The DIII-D team decided to see if they could take this idea further, using the flexibility of the DIII-D tokamak to explore the influence of the plasma shape and heating. In doing so, the team discovered that a reverse-D plasma could sustain a high total pressure without needing the steep high confinement pressure gradient in the edge (and thus, no ELM instabilities). In fact, reverse-D shapes produced plasmas with performance at least as good as normal high-confinement mode on DIII-D, but without the ELMs.

This material is based upon work supported by the Department of Energy (DOE), Ofﬁce of Science, Ofﬁce of Fusion Energy Sciences, using the DIII-D National Fusion Facility, a DOE Ofﬁce of Science user facility.

A. Marinoni, “H-mode grade confinement with L-mode edge in negative triangularity plasmas on DIII-D.” Invited talk at the 60th Annual Meeting of the American Physical Society, Division of Plasma Physics, Portland, OR (2018).