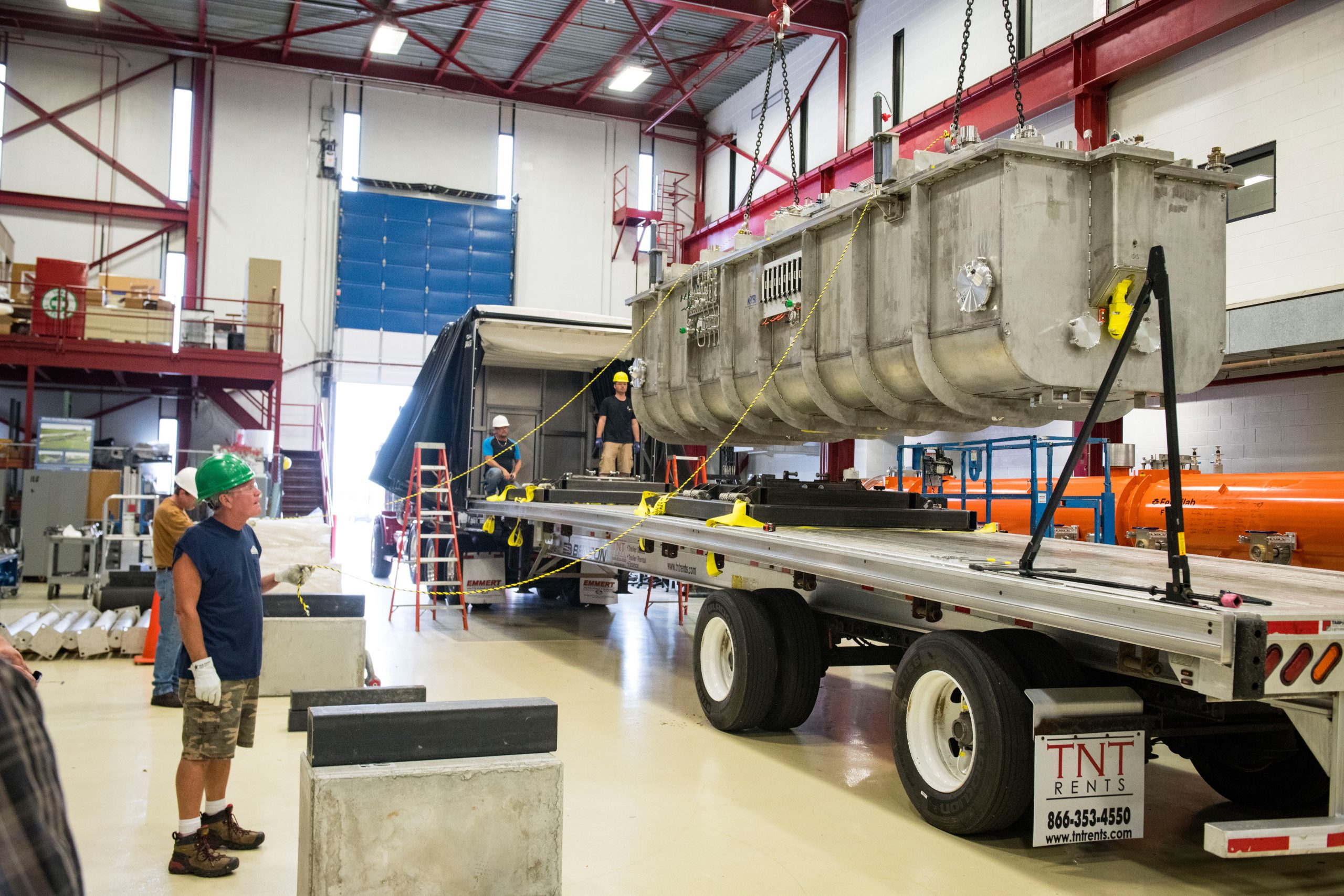 It was a three-hour nighttime road trip that capped off a journey begun seven years ago.

From about 12:30-3 a.m. on Friday, Aug. 16, the first major superconducting section of a particle accelerator that will power the biggest neutrino experiment in the world made its way along a series of Chicagoland roadways at a deliberate 10 miles per hour.

Hauled on a special carrier created just for its 25-mile journey, at 3:07 a.m. the nine-ton structure pulled into its permanent home at the Department of Energy’s Fermilab. It arrived from nearby Argonne National Laboratory, also a DOE national laboratory.

The high-tech component is the first completed cryomodule for the PIP-II particle accelerator, a powerful machine that will become the heart of Fermilab’s accelerator complex. The accelerator will generate high-power beams of protons, which will in turn produce the world’s most powerful neutrino beam, for the international Deep Underground Neutrino Experiment, hosted by Fermilab and provides for the long-term future of the Fermilab research program.

The cryomodule effort at Argonne began in 2012. Scientists and engineers at Argonne led its design, working with a Fermilab team. The Argonne group also built the cryomodule, tested its subcomponents and assembled it, evolving a design used in one of Argonne’s particle accelerators.

“There is a profound significance in the arrival of the first PIP-II cryomodule: it ushers in a new era for the Fermilab accelerator complex, the era of superconducting radio-frequency acceleration,” said Fermilab PIP-II Project Director Lia Merminga.

A cryomodule is the major unit of a particle accelerator. Like the cars of a train, cryomodules are hitched together end-to-end. The PIP-II linear accelerator will comprise 23 of them, adding up to a roughly 200-meter, near-light-speed runway for powerful protons.

And it’s put together one cryomodule at a time. Each houses a string of superconducting acceleration cavities. These shiny metal tubes impart energy to the beam, and they too are placed end-to-end. As the proton beam shoots through one cavity after the next, it picks up energy, thanks to the electromagnetic fields inside the cavities, propelling the beam forward.

By the time the beam exits the final cavity of the last PIP-II cryomodule, it will have gained 800 million electronvolts of energy and travel at 84% of the speed of light.

Then it’s really off to the races: After the beam leaves the PIP-II linac, it will continue down any of a number of paths, charging through Fermilab’s accelerators and eventually smashing into a block of material. The resulting shower of particles will be sorted and routed to various experiments, where scientists study these morsels of matter to better understand how our universe operates at its most fundamental level.

The 60% boost in PIP-II power  — with the potential to increase power into the multimegawatt range at a later time — will provide more particles for scientists to study, accelerating the path to discovery.

The PIP-II accelerator is expected to be integrated into the Fermilab accelerator complex in 2026.

The Argonne-designed PIP-II cryomodule contains eight accelerating cavities that look like big balloon bow ties. They’re a special type, called half-wave resonators. (“Half-wave,” because the profile of the electromagnetic field inside it resembles half of a standing wave.)

The half-wave resonator cryomodule will be first in the line of 23 and the only one of its kind at PIP-II.

Its design is based on those used in Argonne’s ATLAS particle accelerator, which accelerates heavy ions for nuclear physics research.

The PIP-II version features a few improvements. For one, the cavity performance is top-notch, thanks to advances in acceleration technology. The cavities are made of superconducting niobium. Refinements over the past decade in both niobium treatment and cavity manufacture have made it possible for PIP-II cavities to kick the beam to higher energies over shorter distances compared to ATLAS and other comparable cavities. They’re also more energy-efficient.

“We’re proud of the cavities we’ve built and their performance,” said Argonne physicist Zack Conway, who led the effort to build the cavities. “They’re truly world-leading.”

The cryomodule keeps the cavities at a cool 2 kelvins, or minus 270 degrees Celsius. Niobium superconducts at 9.2 K, but its performance soars at 2 K. Advanced cryogenics (the “cryo” in cryomodule) ensure that the PIP-II cavities maintain their chill temperature.

The result is a high-performance vehicle for beam.

“It’s been good to collaborate with one of our sister labs,” said Fermilab scientist Joe Ozelis, who oversees the cryomodule project. “This model of collaborative effort with our partners is key to the continued future success of PIP-II. It’s gratifying to now know that it can indeed work.”

The recently arrived cryomodule has a way to go before it will be permanently installed as part of the PIP-II linear accelerator. For the next several months, Fermilab’s PIP-II group will perform a series of tests to make sure it meets specifications. Then, next year, a Fermilab group will test it with beam, putting the cryomodule through its paces.

“The first of anything in a project like this is always exciting, but there’s more to this for me personally,” said Genfa Wu, Fermilab physicist and a PIP-II SRF and cryogenics system manager. “This is the first low-beta superconducting cryomodule I’ll get to test in my professional experience.”

It’s also an initial run-through for the PIP-II cryomodule collaboration more generally. Twenty-two cryomodules are yet to be built and tested at Fermilab, of which 15 will arrive from outside the United States, including one prototype.

“PIP-II is an international collaboration,” Wu said. “We’re actively working with our international partners to make sure all the cryomodules work together.”

PIP-II’s internationality reflects the biggest experiment it will power, the Deep Underground Neutrino Experiment, supported by the Long-Baseline Neutrino Facility at Fermilab. The flagship science project aims to unlock the mysteries of neutrinos, subtle particles that may carry the imprint of the universe’s beginnings.

Protons from the PIP-II beam will produce a beam of neutrinos, which will be sent 800 miles straight through Earth’s crust from Fermilab to particle detectors located a mile underground at the Sanford Underground Research Facility in South Dakota. DUNE scientists will study how the neutrinos change over that long distance. Their findings aim to tell us why we live in a universe dominated by matter.

More than 1,000 scientists from dozens of countries participate in LBNF/DUNE, which will start in the mid-2020s. It’s a global project with the ambitious research goals to match. And four of the LBNF/DUNE international partners also contribute to PIP-II. For the United States, the international nature of the PIP-II project is a new way of building large accelerator projects.

“The half-wave resonator cryomodule is a stellar example of how DOE labs work together to execute major projects that involve technological aptitude that no single lab has by itself,” Merminga said. “By leveraging Argonne’s experience in half-wave resonator technology, Fermilab is taking a major step in realizing its future while paving the road for even more collaboration. Exactly the same principle applies to our international partnerships, making PIP-II a very powerful new paradigm for future accelerator projects.”

And in some ways, it is all starting to come together when a truck with a huge, high-tech metal container rolls down a street in the middle of the night.

“The collaboration between has been very smooth, from design through fabrication,” Conway said. “That’s been wonderful.”

It pays dividends in other dimensions, too.

“We’ve learned so much from this for future collaborations, and those lessons are going to be vital for the linac project as a whole,” Ozelis said. “This is more than institutional. It’s a human endeavor as well.”

This work is supported by the Department of Energy Office of Science.