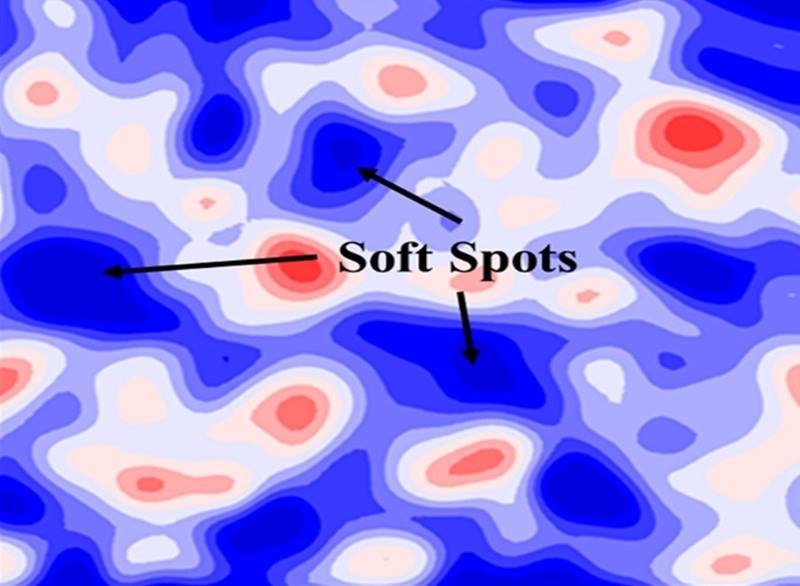 The Achilles Heel of “metallic glasses” is that while they are strong materials—even stronger than conventional steels—they are also very brittle. The initial failures tend to be localized and catastrophic. This is due to their random amorphous (versus ordered crystalline) atomic structure. Computer simulations revealed that the structure is not completely random, however, and that there are some regions in the structure that are relatively weak. Defects nucleate more easily in these regions, which can lead to failure. This understanding of the mechanical properties has led to a strategy for making the material stronger and less brittle.

These materials hold promise if they don’t fail rapidly in certain cases. Knowing how soft spots form and how the resulting deformation in the material propagates could help. How? Such knowledge suggests paths to organize the structure to reduce the propensity for rapid failure. These insights may provide new applications for metallic glasses in industrial and biomedical applications.

Metallic glasses are strong, but they often display only minimal ductility due to the isolated nucleation of failure events that lead to sudden shear band formation and growth. One strategy for improving their ductility is to distribute these nuclei uniformly throughout the structure to spread out the stress and create a more homogeneous flow. In this work, the scientists used atomistic and mesoscale computations to examine the heterogeneity of the strength resulting from the inhomogeneous amorphous structures. The impact on the deformation behavior specifically focused on the ductility and used multiscale modeling methods.

In the research, atomistic simulations reveal highly heterogeneous shear modulus (representative of strength) distribution at the nanoscale in copper-zirconium metallic glasses. The soft (“weak”) population of the distribution exhibited a marked propensity to undergo the shear transformation leading to shear banding. By employing a mesoscale deformation model, the scientists found that the bulk deformation is dependent on the spatial heterogeneity of the local shear moduli. They identified a critical spatial correlation length (distance between soft spots) for the heterogeneity that achieved the best tensile ductility. This discovery is important for the fundamental understanding of the role of spatial heterogeneity in influencing the deformation behavior of amorphous structures. Scientists can use this understanding to design new ductile metallic glasses by tuning the inherent heterogeneity to achieve enhanced ductility.

This work was supported by the Department of Energy (DOE) Established Program to Stimulate Competitive Research program (N.W. and L.L.) and by the Office of Science, Basic Energy Sciences, Materials Sciences and Engineering Division (J.D., M.A., and R.O.R.). This work used the National Energy Research Scientific Computing Center, a DOE Office of Science user facility.

After Years of Ankle Pain and Limited Mobility, Life-Changing Surgery at HSS