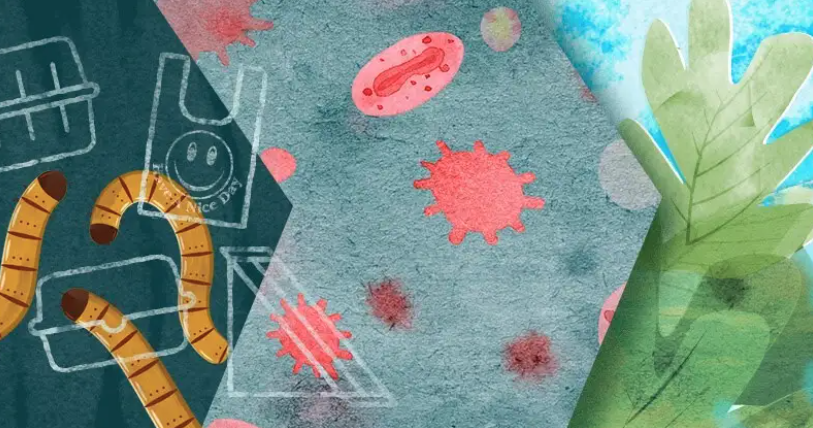 Each year, more than 380 million tons of plastics are produced globally. Less than 10% of these plastics are reused or recycled, leading to significant accumulation and waste, not to mention the obvious environmental implications.

A large fraction of plastic is made from polyolefins, which are hard to recycle. Polyethylene, commonly used in disposable shopping bags, plastic wraps and food storage bags, falls into this category. So does polypropylene, which turns up in plastic containers, among other things.

One possible tool for addressing these hard-to-recycle plastics is the microbial community that lives in the gut of the yellow mealworm. It turns out these microbes are uniquely suited for the work.

University of Delaware’s Mark Blenner, associate professor of chemical and biomolecular engineering, is leading researchers from UD, Oak Ridge National Laboratory and Washington University in St. Louis to better understand and improve the ability to engineer these microbes to do the job.

The five-year project is supported with $9 million in funding from the Department of Energy. The idea is to develop multiple types of microbial systems capable of degrading polyolefin plastics into smaller molecules that can be repurposed into commodity chemicals or upcycled into building blocks for biorenewable polymers.

“We hope that within five years we’re going to be able to handle real post-consumer plastic waste using this microbial-community approach,” said Blenner.

Complicating factors in the work

Dealing with plastic wastes in the real world requires a huge diversity of chemistry. Some plastic waste, such as polyethylene terephthalate (PET), a form of polyester found in plastic bottles and other consumer products, is relatively receptive to biological degradation.

Polyolefins, however, have a much more difficult structure to break down. It’s especially difficult when using biological methods. The challenge becomes even more complicated when considering that the everyday plastics contain more than the plastic polymer itself — there are additives, antioxidants and other things, too.

“These sorts of molecules often confound the chemical processes that we’ve set up to try and deal with plastic waste,” said Blenner. “Even just a stream of low-density polyethylene, the kind found in plastic bags and wrappers that go around products, can take different forms, be different colors, have different mechanical properties.”

Those variations derive from differences in the plastics’ chemical composition, so the additives will require different microbes and approaches for breaking them down.

In previous research led at UD by Kevin Solomon, associate professor of chemical and biomolecular engineering, the researchers began to answer questions about which microbes in the mealworm’s gut eat and degrade plastics. The UD team developed approaches to identify which microbes were most important to the process by analyzing the genomic sequences of microbial communities found there to understand their genetic makeup. They also began cultivating some of these individual microbes outside of the worm and learned that while microbial communities are more efficient at degrading plastics, many of the individual microbes can do it alone.

Now, researchers involved in the interinstitutional project plan to explore the molecular mechanisms that produce this “better-plastic-degrading capability.” For one thing, the researchers would like to see if there are ways to optimize the worm’s diet to further promote this ability, since evidence in the literature showed that when yellow mealworms are co-fed bran, an inexpensive food source, the mealworm’s gut microbes functioned in a way that bettered their plastic-eating performance.

The idea isn’t to create healthier worms. Instead, the researchers are hoping to distinguish the microbes in the mealworm’s gut that are more important to the plastic-degrading process from all the other microbes that are present. They also want to determine what it is about the co-feed that optimizes the community and then try to replicate these features.

“If we can determine the key factors that promote that right environment for eating plastics, then one of our goals is to engineer the microbes to do this on their own, without dietary additives — and without the worm,” said Blenner.

A significant portion of the new project is dedicated to developing the genetic engineering capabilities to work with these microbes that are not typically found in research labs. Blenner calls them “wild microbes” because they derive from an environmental source, the yellow mealworm.

“We hope to develop a general set of engineering tools to manipulate the genetics and metabolism of the microbes,” said Blenner. “Once we can do this kind of engineering in the individual microbes, next we must figure out how to put the engineered microbes back together into stable microbial communities with the capacity to convert plastic waste into new polymers.”

To understand the pathways that will make this possible, collaborator Yinjie Tang’s team at Washington University will use mass spectrometry experiments to map out, through metabolism, the reactions that occur when the microbes degrade plastics. Specifically, Tang’s team wants to trace which reactions are using carbon that originates from the plastic itself to understand what the plastic molecules are degraded into and how the microbes use them. For instance, perhaps an individual microbe produces some substances that it finds useless, but that another microbe in the community needs.

UD researchers involved in the work include Blenner, Solomon and LaShanda Korley, who directs the Center for Plastics Innovation, an Energy Frontier Research Center established at UD with support from the U.S. Department of Energy. Blenner noted that Solomon remains a key collaborator in the work and that his novel computational methods and genetic engineering techniques will help the team understand how plastics are being modified by individual microbes, the microbial community and the worms. Korley’s support will provide needed technical expertise to understand plastic analytics. All of this will enable Blenner to focus on ways to develop and deploy these genetic engineering tools in non-model systems.

The research team also hopes to engineer microbes that don’t naturally degrade plastics to become capable of doing so, by giving them the tools and genes that are missing. To get there, Oak Ridge National Laboratory’s Carrie Eckert, synthetic biology group leader, Adam Guss, genetic and metabolic engineer, and William Alexander, associate research and development staff scientist, will contribute expertise in identifying bacterial defense systems that make it harder for organisms to be genetically modified and in developing workflows to help engineer around them.

If successful, the team’s overall approach can help support a circular plastics economy, while reducing carbon dioxide emissions and dependency on petroleum.

“We tried to focus on some of the harder plastics from a biological perspective to degrade, plastics that we don’t recycle very well right now … that mechanical recycling can’t feasibly handle and where chemical recycling hasn’t really gotten there yet,” said Blenner.