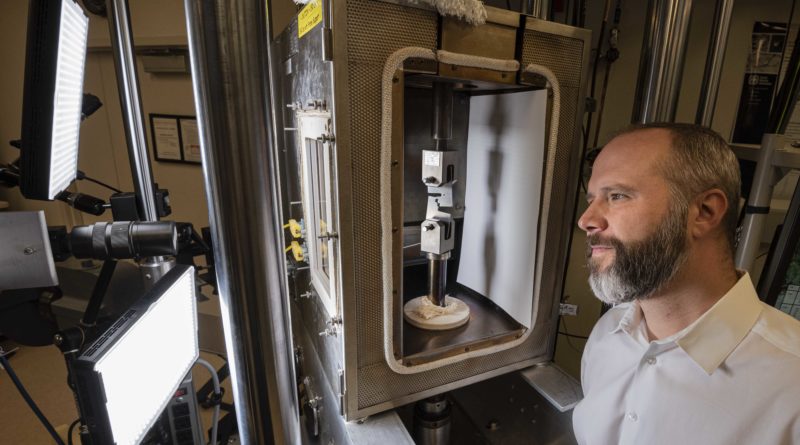 ALBUQUERQUE, N.M. — Since people started forging and working with metal, they’ve arguably been interested in how it breaks. But only since the 1950s have scientists and engineers had a mathematical framework for using laboratory measurements of material failure to predict a structure’s resistance to cracking.

“These tools work well for brittle materials, such as glass, but often not for other materials,” said Brad Boyce, a materials scientist at Sandia National Laboratories.

Researchers who know the existing theories still struggle with predicting fractures in materials with complex microstructures or components made with 3D printing. They also do not work well for ductile metals, such as some steels, that deform and stretch before they fracture.

Around the world, materials scientists and engineers are trying different ways to predict fractures in ductile metals, but it’s not clear which approach is most accurate. To compare the different methods, Sandia researchers have presented three voluntary challenges to their colleagues: Given the same basic information about the shape, composition and loading of a metal part, could they predict how it would eventually fracture?

An overview of the third Sandia Fracture Challenge was recently published in a special issue of the International Journal of Fracture dedicated to results from the challenge. Now the friendly competition has shifted into a collaborative community of researchers refining their techniques for engineering reliable structures made from a variety of materials.

Learning from the broad community

Typically, predictions like these involve repeated rounds of experimental measurements and calculations, so that the modeling is essentially calibrated to known fracture data. For these challenges, however, participants did not know the actual outcome until after the end of the competition.

The first challenge, held in summer 2012, attracted 13 teams of researchers from universities, national labs and companies to predict crack initiation and spreading in a common stainless steel alloy. They all received the same engineering drawing of the test piece, microscope images of the material’s microstructure, data about the material’s fracture toughness and measurements of how much stress it accumulated when strained. Then, each team applied its own method to predict a crack’s path under a given amount of force.

Meanwhile, groups of researchers at Sandia and at the University of Texas at Austin, who were not participating in the prediction competition, fractured the material in their labs. They loaded test pieces into machines and pulled on them until they tore in half. Cameras recorded the crack paths, while instruments measured the amount of force on the samples.

None of the 13 predictions completely matched all the experimental results, though many worked well for aspects of crack formation. With only one situation for comparison, it was hard to determine which prediction methods were most effective.

Two years later, the Sandia team issued a second challenge. This time 14 teams predicted the fracture pattern in a component made of a titanium alloy common in airplanes, spacecraft and medical devices. The teams were asked to predict crack formation from very slow loading as before and under rapid loading, such as that experienced in a car crash.

Rapid loading provides an interesting situation because quick force creates heat in the material and leaves little time for the heat to dissipate. In the second challenge, most teams did not combine thermal and mechanical modeling, Boyce said. “But those that did tended to get the details right.”

The third challenge, held in 2016, asked researchers to predict cracks in stainless steel machined with a 3D printer. A 3D printer can make custom shapes impossible to create through traditional manufacturing methods, but the microstructure of printed metals can be more porous than forged metals in previous challenges. The researchers wondered if the internal porosity could make printed metals fracture sooner than expected.

For this challenge, 21 teams received extensive characterization data from tensile tests and detailed microstructural imaging. All teams predicted the crack initiation site and resulting path observed during experimental tests. The team with the best performance had participated in the previous challenges and learned from those prior experiences to improve their approach, Boyce said.

Now, the challenge participants continue as a community-owned collaboration, gathering together to form the Structural Reliability Partnership. This group of scientists and engineers at universities, industry and national labs is working to improve models of fracture. There are 17 institutions in the partnership, and partners share results with each other before they are published.

While the group can eventually tackle a wide variety of prediction challenges to engineer reliability, some of its initial interests include predicting physical properties of 3D printed metals and studying how hydrogen gas alters metal in hydrogen infrastructure. Predictions like these could help engineers better understand the reliability of shock-loaded springs or bolted joints, which are currently overdesigned to compensate for poorly understood fracture behavior.

The result means not only safer structures such as cars and airplanes, but also lighter vehicles that are more fuel efficient.

In the future, the partnership’s efforts could expand to study plastics and ceramics, and zoom into fracture behavior at the micro-, nano- and atomistic scales, Boyce said.

For Boyce, the fracture challenges also inspired his own project, funded by Sandia’s Laboratory Directed Research and Development program. Advances in microscope technology mean materials scientists can see microstructural details of materials better than ever before. Boyce is studying subtle details of microscopic voids in materials to better understand how a fracture begins inside a material before it’s visible.