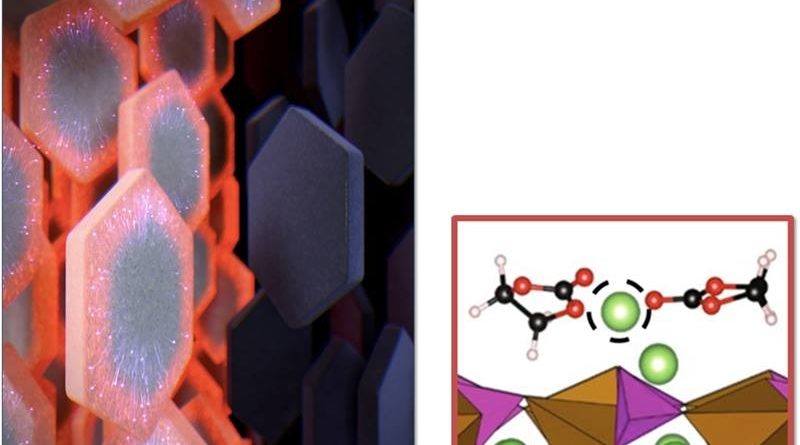 Electric vehicles, cell phones, and remote sensors are just a few of the devices that would benefit from better lithium-ion batteries. Designing such batteries means knowing how to control the flow of lithium ions. Scientists used chemically sensitive X-ray microscopy to map lithium transport during battery operation. The measurements were taken on length scales relevant to the chemical variations affecting electrode stability. They discovered an unexpected surface diffusion of lithium. It’s responsible for the rapid growth of a lithium-rich phase that separates from a lithium-depleted phase.

As lithium batteries charge and discharge, mechanical stresses occur in the electrodes. These stresses lead to reduced battery lifetimes. The new insights into how lithium migrates can guide the engineering of safer, longer-lasting, and higher-power batteries.

Battery engineers need to know how lithium travels through an electrode as the electrode experiences various charge states and rates of discharge during a use cycle. Using a sophisticated form of X-ray chemical imaging, researchers have discovered a liquid-assisted mechanism for transporting lithium across the surface that affects how quickly lithium moves through an electrode particle. The surface path affects whether the particle forms local regions of extreme lithium concentration, resulting in mechanical instability and degradation of the electrode structure.

When a lithium battery discharges, lithium ions are transferred from a carbon-based electrode, rich in lithium, through a liquid electrolyte. Lithium is finally incorporated into a lithium-deficient electrode, which has the ability to chemically accept and store the lithium ions. The accepting electrode is made up of crystalline oxide particles with atoms such as iron, phosphorus, and lithium holding the structure together. When the material is half-full of lithium, it can comfortably exist with spaces that can accommodate additional lithium in a solid-solution mixture. However, depending on the charge history, it can also separate into two extreme phases, one without any lithium and one completely filled with as many lithium as iron atoms. The key to mechanical stability is to retain a solid solution mixture and inhibit the formation of local regions with the extreme phases that stress the material.

Scientists used chemical valence sensitive X-ray microscopy to measure the movement of lithium and the rate of phase separation in thousands of battery nanoparticles, in place and under operation, while in the battery chemical environment. The particles were previously thought to resist the rapid spreading and phase separation of lithium because there is only one fast direction of bulk solid lithium transport. The fast direction is perpendicular to the surfaces of the particles and was thought to prevent fast lateral phase growth. In this work, with X-rays and in-place on actual battery particles, the researchers determined that surface transport of lithium is also relatively fast and provides other dimensions for distributing lithium, such that quick phase separation takes place. Understanding and engineering the surfaces of lithium-ion battery electrode particles is a new frontier in materials research. The scientists determined surface chemical environments where the surface transport is slowed and the lithium concentration in the nanoparticles remains more uniform. Extending this finding into practical electrode engineering will be key to making higher performance and longer lasting lithium batteries.