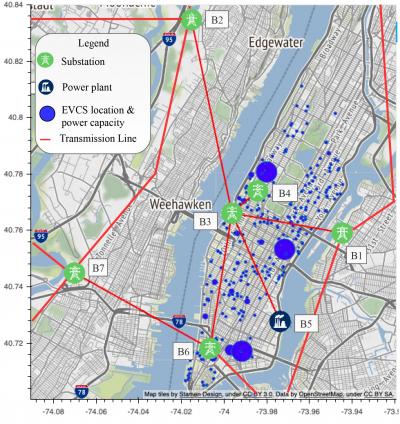 BROOKLYN, New York, Wednesday, August 14, 2019 – Electric cars are an essential component of a lower-carbon future, but a new report from researchers at the New York University Tandon School of Engineering raises the specter that plug-in electric vehicles — and the charging stations that supply them — could be prime vectors for cyberattacks on urban power grids.

“In simulations using publicly available information about charging station usage in Manhattan and the structure of the island’s power grid, our research team found that a fleet of just roughly 1,000 simultaneously charging electric vehicles would be adequate for mounting an attack whose effects could rival the blackout that affected the city’s West Side last month,” said Yury Dvorkin, assistant professor in NYU Tandon’s Department of Electrical and Computer Engineering.

NYU Tandon doctoral candidate Samrat Acharya led the research in collaboration with Dvorkin and Professor Ramesh Karri, also from the Department of Electrical and Computer Engineering.

“This simulation is a wake-up call to the public and policymakers, and an encouragement to take steps to protect the data generated between electric cars and charging stations — most of which could be co-opted by a hacker with college-level skills,” Dvorkin said.

Information about the structure of the power grid is more fragmented and difficult to access; however, the research team demonstrated that a combination of public documents and resources available through industry standards-setting organizations and from utilities’ public releases may be tapped to construct power grid topology and model the system components.

Together, these elements allow an attacker to use charging stations as portals to remotely manipulate electric vehicle charging and the power grid by causing instabilities that could range from barely noticeable to significantly disruptive.

Power grid attacks are not just the stuff of paranoid nightmares. In 2015, a sophisticated cyberattack crippled a power grid in the Ukraine, and this year, a small-scale attack in the western United States became the first reported successful incursion on a domestic power grid. The NYU Tandon researchers emphasized that while the number of electric cars on the road today – about 1 million – is not concentrated in one place and is therefore insufficient to produce the impact reported in their simulations, the threat potential will unquestionably rise as the electric fleet grows. The Edison Electric Institute estimates about 9.6 million charging ports will support a remarkable 18.7 million plug-in electric vehicles by 2030 – a disputed number, although all forecasters predict remarkable increases. New York County – which includes Manhattan – has just over 2,500 electric vehicles registered.

. Dvorkin’s research is funded by the National Science Foundation, the U.S. Department of Energy, and the Alfred P. Sloan Foundation.

About the New York University Tandon School of Engineering

The NYU Tandon School of Engineering dates to 1854, the founding date for both the New York University School of Civil Engineering and Architecture and the Brooklyn Collegiate and Polytechnic Institute (widely known as Brooklyn Poly). A January 2014 merger created a comprehensive school of education and research in engineering and applied sciences, rooted in a tradition of invention and entrepreneurship and dedicated to furthering technology in service to society. In addition to its main location in Brooklyn, NYU Tandon collaborates with other schools within NYU, one of the country’s foremost private research universities, and is closely connected to engineering programs at NYU Abu Dhabi and NYU Shanghai. It operates Future Labs focused on start-up businesses in downtown Manhattan and Brooklyn and an award-winning online graduate program. For more information, visit