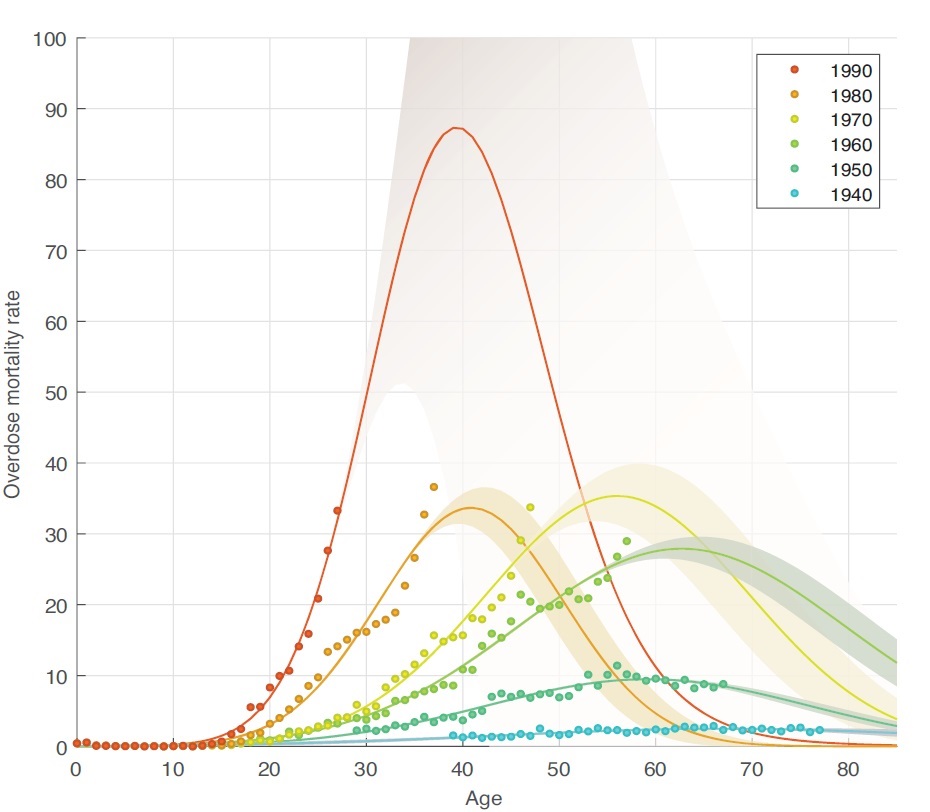 PITTSBURGH, May 4, 2020 – It’s no secret that America has an ever-worsening drug addiction problem, but how much does a person’s birth year come into play?

Researchers at the University of Pittsburgh Graduate School of Public Health show that the generation a person was born into — Silent Generation, Baby Boomer, Generation X or Millennial — strongly predicts how likely they are to die from a drug overdose, and at what age. These results appear today in Nature Medicine.

“Sociological imprinting marks a person born in a given time,” said senior author Donald Burke, M.D., who holds the Jonas Salk Chair of Population Health and is dean emeritus of Pitt Public Health. “It reflects attitudes they encountered right at the time of adolescence, and attitudes about drug use — those stay for a lifetime.”

Up until now, research into the demographics of drug use has focused more on age, finding that midlife is the riskiest time for drug-related death, but Burke and colleagues saw that the year a person was born also has a large effect.

For the study, lead author Hawre Jalal, Ph.D., assistant professor of health policy and management at Pitt Public Health, analyzed 661,565 drug overdose deaths reported by the Centers for Disease Control and Prevention from 1979 to 2017, plotting death rate as a function of both age and either birth year or generation.

The data clearly showed that the overdose epidemic emerged abruptly among the Baby Boomers, shifted youth-ward for Generation X, and then soared to new heights among the Millennials. These phases map onto the previously identified drug waves that came with the waxing and waning popularity of prescription opioids, heroin and fentanyl, each in turn.

Peering within each generation, Jalal and colleagues saw a steady march toward greater overdose risk at younger ages for each successive birth year, which they found quite surprising.

“There’s no reason why the lines should be fanning like this,” Jalal said. “If you look at breast cancer, for example, or any other mortality curves, they don’t look like that.”

It’s not clear why this is happening, Jalal said, but the pattern is too clean to chalk up to chance. And an overall rise in drug overdose deaths — although that is happening in the background of these data — does not explain away the results presented in this study.

Burke uses an analogy borrowed from infectious diseases to explain the progressive shift of drug overdose deaths to younger ages.

“There is an epidemic going on. And just like an infectious disease, there is a transmission,” said Burke, also a professor in Pitt Public Health’s Department of Epidemiology. “In this case, it propagates from older to younger age groups.”

Burke hopes that the highly regular patterns uncovered in this analysis will give policy makers a tool for testing whether their measures to curb drug overdose deaths are working over the long term — any effective intervention should disrupt the pattern.

Funding was provided by the National Center for Advancing Translational Sciences (grant 1KL2TR0001856) and the Robert Wood Johnson Foundation (grant 72858).

To read this release online or share it, visit https://www.upmc.com/media/news/050420-od-deaths-across-generations [when embargo lifts].