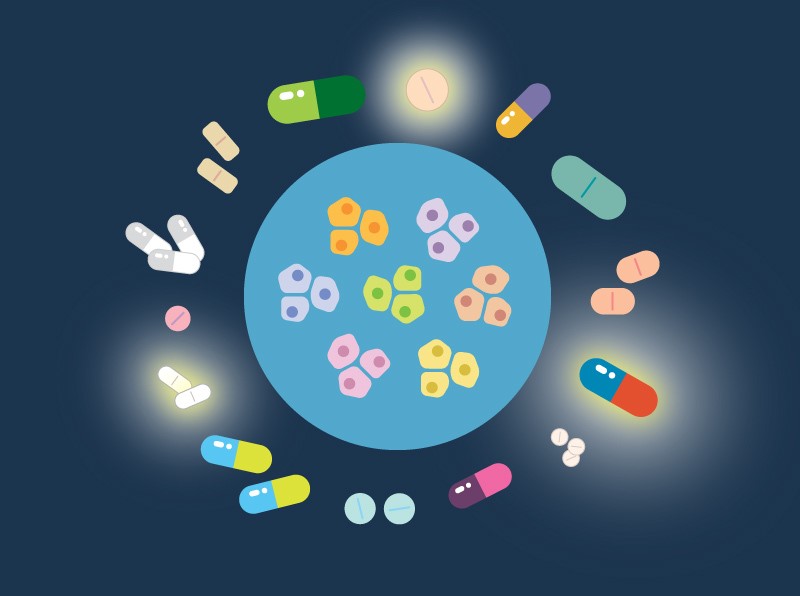 BOSTON – A variety of existing drugs for treating conditions such as diabetes, inflammation, alcohol abuse, and arthritis in dogs can also kill cancer cells in the lab, according to a study by scientists at Dana-Farber Cancer Institute and the Broad Institute of MIT and Harvard. Some of the compounds might in due course be tested in clinical trials, while others could help jump-start new drug development.

Scientists reported their findings in the new journal Nature Cancer, saying they found an “unexpectedly high rate of anti-cancer activity” among 4,518 drugs that were tested against 578 laboratory cancer cell lines spanning 24 tumor types. Most of the drugs tested were not originally developed or used in oncology (cancer treatment).

Using a massive search strategy designed to identify drugs that could be repurposed as cancer treatments or as candidates for cancer drug development, the scientists identified 49 non-cancer drugs that selectively killed cancer cells and whose activity against cancer could be predicted using molecular biomarkers. They reported that another 103 compounds with less selectivity against the cancer cell lines were also identified.

“It is conceivable that some non-oncology drugs could be brought directly to clinical trials for testing in cancer patients,” said the authors, led by Steven Corsello, MD, of Dana-Farber, the study’s first author and the founder of the Broad’s Drug Repurposing Hub. However, they said, it is likely that the potential drug candidates will require further study and modification before being introduced into clinical studies.

“We thought we’d be lucky if we found even a single compound with anti-cancer properties, but we were surprised to find so many,” said Todd Golub, MD, chief scientific officer and director of the Cancer Program at the Broad, Charles A. Dana Investigator in Human Cancer Genetics at Dana-Farber, and professor of pediatrics at Harvard Medical School.

The new work is the largest study yet to employ the Broad’s Drug Repurposing Hub, a collection that currently comprises more than 6,000 existing drugs and compounds that are either FDA-approved or have been proven safe in clinical trials (at the time of the study, the Hub contained 4,518 drugs). The study also marks the first-time researchers screened the entire collection of mostly non-cancer drugs for their anti-cancer capabilities.

Some of the compounds killed cancer cells in unexpected ways. “Most existing cancer drugs work by blocking proteins, but we’re finding that compounds can act through other mechanisms,” said Corsello. Some of the four-dozen drugs he and his colleagues identified appear to act not by inhibiting a protein but by activating a protein or stabilizing a protein-protein interaction. For example, the team found that nearly a dozen non-oncology drugs killed cancer cells that express a protein called PDE3A by stabilizing the interaction between PDE3A and another protein called SLFN12 — a previously unknown mechanism for some of these drugs.

Most of the non-oncology drugs that killed cancer cells in the study did so by interacting with a previously unrecognized molecular target. For example, the anti-inflammatory drug tepoxalin, originally developed for use in people but approved for treating osteoarthritis in dogs, killed cancer cells by hitting an unknown target in cells that overexpress the protein MDR1, which commonly drives resistance to chemotherapy drugs.

The researchers were also able to predict whether certain drugs could kill each cell line by looking at the cell line’s genomic features, such as mutations and methylation levels, which were included in the CCLE database. This suggests that these features could one day be used as biomarkers to identify patients who will most likely benefit from certain drugs. For example, the alcohol dependence drug disulfiram (Antabuse) killed cell lines carrying mutations that cause depletion of metallothionein proteins. Compounds containing vanadium, originally developed to treat diabetes, killed cancer cells that expressed the sulfate transporter SLC26A2.

The observations in the study may represent starting points for new drug development. “The genomic features gave us some initial hypotheses about how the drugs could be acting, which we can then take back to study in the lab,” said Corsello. “Our understanding of how these drugs kill cancer cells gives us a starting point for developing new therapies.”

This collaboration involved the Broad’s Center for the Development of Therapeutics, the PRISM team, the Cancer Data Sciences team, and the labs of Todd Golub and Matthew Meyerson, MD, PhD, of Dana-Farber and the Broad. The work was funded in part by SIGMA (Carlos Slim Foundation, Slim Initiative in Genomic Medicine for the Americas), the National Institutes of Health, the Conquer Cancer Foundation (Conquer Cancer Foundation of the American Society of Clinical Oncology), and the Next Generation Fund at the Broad Institute of MIT and Harvard.

Dana-Farber Cancer Institute is one of the world’s leading centers of cancer research and treatment. It is ranked in the top 5 of U.S. News and World Report’s Best Hospitals for both adult and pediatric cancer care. Dana-Farber’s mission is to reduce the burden of cancer through scientific inquiry, clinical care, education, community engagement, and advocacy.  We provide the latest in cancer for adults through Dana-Farber/Brigham and Women’s Cancer Care and for children through Dana-Farber/Boston Children’s Cancer and Blood Disorders Center. Dana-Farber is dedicated to a unique and equal balance between cancer research and care, translating the results of discovery into new treatments for patients locally and around the world.