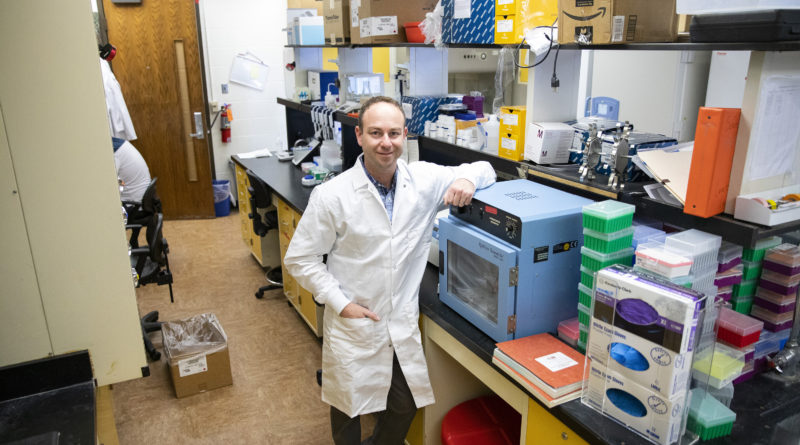 Philip Lavretsky, Ph.D., assistant professor in The University of Texas at El Paso’s Department of Biological Sciences, collaborated with the Smithsonian Institution’s National Museum of Natural History and National Zoo on the study.

In the manuscript titled “Assessing Changes in Genomic Divergence Following a Century of Human Mediated Secondary Contact among Wild and Captive‐bred Ducks,” Lavretsky and colleagues utilize state-of-the-art genomic techniques to access the genomes of American black ducks and mallards that were sampled across time and space. This research not only renders similarities between the two ducks, it represents the growing importance of museum specimens in the realm of DNA research.

“We first started this project to understand why mallards and American black ducks were genetically so similar,” Lavretsky said. “To do so, we needed to get the genetic signature from today and in the past.”

However, this was not the only question that Lavretsky needed to answer. Work published previously by Lavretsky and associates in the journal Ecology and Evolution set the stage for what would become the more interesting story.

“We started to pick up two genetic populations among our North American mallards,” Lavretsky said. “We had a hypothesis that perhaps the release of game-farm mallards, which has been practiced in North America since 1920, may in fact have fundamentally changed the genetic make-up of North America’s wild mallard population through widespread hybridization.”

Lavretsky not only needed more modern samples to really understand what was happening between American black ducks, wild mallards, and game-farm mallards, but he needed to go back in time. To do so, Lavretsky partnered with co-authors Helen James, Ph.D., research zoologist and curator of birds at the National Museum of Natural History, and Robert Fleischer, Ph.D., head of the Smithsonian Conservation Biology Institute’s Center for Conservation Genomics. Together, they analyzed DNA samples of historical (1860-1915) museum specimens that were sampled before wide-spread game-farm mallard releases started in North America, and compared these to today’s populations.

“We knew that in addition to the historical data, we really needed to get known game-farm mallards that are currently being released by hunting or dog training preserves that could potentially escape and breed with wild populations,” Lavretsky said. “And so we were able to get these reference game-farm mallards from two eastern states that allowed us to directly test whether the second mallard lineage now widespread in eastern North America was due to interbreeding with these domestic game-farm mallards.”

In the paper, researchers concluded that black ducks and mallards have always been genetically closely related, and despite evidence of historical hybridization, they continue to maintain genetic separation; a finding that overturns decades of prior research and speculation suggesting the genetic extinction of the American black duck due to extensive interbreeding with mallards.

Unlike the happier ending reported for the American black duck, the authors conclude that the genetics of North America’s mallards had indeed been fundamentally transformed through extensive, landscape-level hybridization with released game-farm mallards.

“Who knew that old natural history museum specimens would one day become repositories of genetic information from the past?” James said. “For me, this study shows just how valuable that information can be. It allays some fears that the iconic American black duck may be facing genetic extinction via hybridization. Yet, it raises new fears that interbreeding between wild and domesticated mallards threatens the genetic integrity of the wild mallard, especially in the eastern United States”

“Based on our estimates, more than 90% of all eastern mallards possess a substantial amount of game-farm mallard genetics,” Lavretsky said. “This is a stark finding, as it indicates that the eastern North American mallard population is effectively a wild x domestic mallard hybrid swarm today. I find it a bit sad that there is only at maximum a 10% chance that someone looking at a mallard in eastern North America is in fact looking at a wild North American mallard.”

How, and to what extent these domestic genes impact wild mallard population remains to be determined. However, many populations in which stocking of domestic variants start – such as rainbow trout, runs of salmon, bobwhite quail, pheasants, etc. – the stockings do not end due to populations becoming ever-poorly adapted. Mallard populations are recently declining in eastern the U.S., and the authors hypothesize that the increase in domestic genes in these populations may explain this decline. Moreover, finding that the game-farm mallard genetic signature is moving westward is especially worrisome for the main breeding mallard population of the Prairie Pothole region. Research is ongoing to answer these new inquiries.

“It is essential to identify and understand what species, population, etc. are in regard to their adaptive and non-adaptive potential, particularly when attempting to inform conservation or management efforts,” Lavretsky said. “We thought we had one mallard population, but in fact, we have two very distinct mallards breeding in North America.

“I believe that with advances in ancient DNA techniques, ancient/historical museum specimens are becoming an ever more valuable asset to understand the speciation processes, identify unique and extinct lineages, determine the timing of speciation events, and without which, the same comparisons that were done in our recent article would not be possible.”