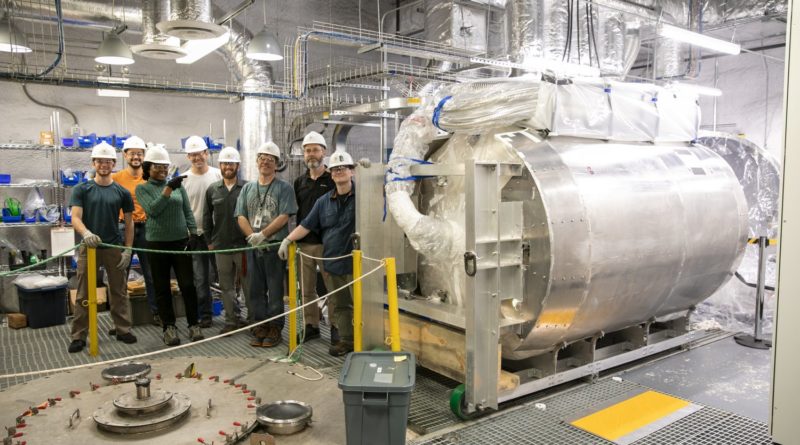 Q: How do you get a 5,000-pound, 9-foot-tall particle detector, designed to hunt for dark matter, nearly a mile underground?

Last week, crews at the Sanford Underground Research Facility (SURF) in South Dakota strapped the central component of LUX-ZEPLIN (LZ) – the largest direct-detection dark matter experiment in the U.S. – below an elevator and s-l-o-w-l-y lowered it 4,850 feet down a shaft formerly used in gold-mining operations.

This final journey of LZ’s central detector on Oct. 21 to its resting place in a custom-built research cavern required extensive planning and involved two test moves of a “dummy” detector to ensure its safe delivery.

Jake Davis, a SURF mechanical engineer who worked on the cryostat move, said, “Between the size of the device, the confines of the space, and the multiple groups involved in the move, the entire process required rigorous attention to both the design and the scheduling. Prior to rigging the detector under the cage, we did testing with other cranes to see how it would react when suspended. We also completed analysis and testing to ensure it would remain nice and straight in the shaft.”

He added, “The ride was slow, right around 100 feet per minute. The ride to the 4,850-foot level typically takes 13-15 minutes. Today, it took close to 45 minutes. I rode in the cage, watching it through an inspection port in the floor. There was a huge sigh of relief after the move, but there’s still a lot of work ahead to finish LZ.”

Theresa Fruth, a postdoctoral research fellow at University College London who works on LZ’s central detector, said that keeping LZ well-sealed from any contaminants during its journey was a high priority – even the slightest traces of dust and dirt could ultimately affect its measurements.

“From a science perspective, we wanted the detector to come down exactly as it was on the surface,” she said. “The structural integrity is incredibly important, but so is the cleanliness, because we’ve been building this detector for 10 months in a clean room. Before the move, the detector was bagged twice, then inserted in the transporter structure. Then, the transporter was wrapped with another layer of strong plastic. We also need to move all our equipment underground so we can do the rest of the installation work underground.”

The central detector, known as the LZ cryostat and time projection chamber, will ultimately be filled with 10 tons of liquid xenon that will be chilled to minus 148 degrees Fahrenheit. Scientists hope to see telltale signals that are produced when dark matter particles interact with the heavy xenon atoms in this cryostat.

The liquid form of xenon, a very rare element, is so dense that a chunk of granite can float atop its surface. It is this density, owing to the heavy atomic weight of xenon, that makes it a good candidate for capturing particle interactions.

The cryostat is a large tank, assembled from ultrapure titanium, is about 5 1/2 feet in diameter. It contains systems with a total of 625 photomultiplier tubes that are positioned at its top and bottom (see a related article). These tubes are designed to capture flashes of light produced in particle interactions.

Pawel Majewski of the Rutherford Appleton Laboratory in the U.K., who led the design, fabrication, cleaning, and delivery of LZ’s inner cryostat vessel for the U.K. Science and Technology Facilities Council, said, “Now it is extremely gratifying to see it … holding the heart of the experiment and resting in its final place in the Davis Campus, one mile underground.”

LZ is designed to hunt for theorized dark matter particles called WIMPs, or weakly interacting massive particles. Dark matter makes up about 27 percent of the universe, though we don’t yet know what it’s made of and have only detected it through its gravitational effects on normal matter.

LZ is 100 times more sensitive than its predecessor experiment, called LUX, which operated in the same underground space. Placing LZ deep underground serves to shield it from much of the steady bombardment of particles that are present at the Earth’s surface.

LZ’s cryostat will be surrounded by a tank filled with a liquid known as a scintillator that will also be outfitted with an array of photomultiplier tubes and is designed to help weed out false signals of unwanted particle “noise.” And the cryostat and scintillator tank will be embedded within a large water tank that provides a further buffer layer from unwanted particle signals.

While LUX’s main detector was small enough to fit in the SURF elevator, LZ’s cryostat narrowly fit in the elevator shaft.

It was first moved outside of a clean room at the surface level, picked up with a forklift, and carried into position below the elevator cage. It was then attached to the underside of the cage with slings and straps, where it was slowly moved down to the level of the Davis Cavern, its final resting place.

Once detached from the elevator cage, it was moved using air skates on a temporarily assembled surface – akin to how an air hockey puck moves across the table’s surface. Because of the cryostat’s size, crews had to first temporarily remove underground duct work to allow the move.

Jeff Cherwinka, the LZ chief engineer from the University of Wisconsin, led the planning effort for the move along with SURF engineers and other support. “This was the most challenging move of a detector system that I have ever done in decades of working on experiments,” Cherwinka said.

Murdock “Gil” Gilchriese, LZ project director and a physicist at Lawrence Berkeley National Laboratory (Berkeley Lab), said, “Next, the cryostat will be wrapped with multiple layers of insulation, and a few other exterior components will be installed.” Berkeley Lab is the lead institution for the LZ project.

“Then it will get lowered into the outer cryostat vessel,” he added. “It will take months to hook up and check out all of the cables and make everything vacuum-tight.” Most of the LZ work is now concentrated underground, he said, with multiple work shifts scheduled to complete LZ assembly and installation.

There are plans to begin testing the process of liquefying xenon gas for LZ in November using a mock cryostat, and to fill the actual cryostat with xenon in spring 2020. Project completion could come as soon as July 2020, Gilchriese said.

–Erin Broberg of the Sanford Underground Research Facility contributed to this press release.

The Sanford Underground Research Facility’s mission is to enable compelling underground, interdisciplinary research in a safe work environment and to inspire our next generation through science, technology, engineering, and math education. For more information, please visit the Sanford Lab website at http://www.sanfordlab.org.