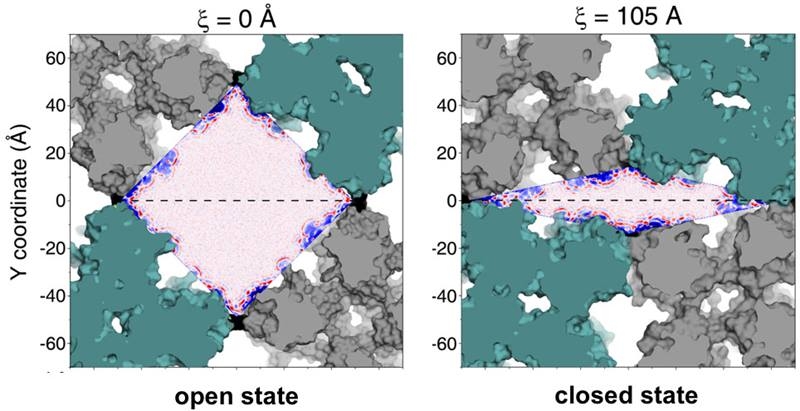 Just like building a car on an assembly line, self-assembly with proteins too undergoes a series of steps. Different assembly paths result in different cars and assembly architectures. Scientists call the assembly pathway that components must follow the free energy landscape. Now, a team described the first example of a synthetic protein assembly where the process for following this landscape was fully determined by computer simulations. This achievement let scientists redesign the assembly line to create a material that they could tune. Thus, they built an assembly with protein components that the team can toggle between three states with varying porosities and molecular densities.

For the first time, a team determined and predictably manipulated the energy landscape of a material assembled from proteins. They used that knowledge to change its pore size in response to specific signals. Designing materials that easily and reliably morph on command could benefit water filtration, sensing applications, and adaptive devices.

Building materials possessing as-yet unachieved predictable reconfiguration of their structural organization is quite challenging. Meeting this challenge requires a detailed understanding of all possible molecular conformations, spatial positioning of interacting components, and the energies required for these transformations along the assembly pathway. Natural protein assemblies precisely adapt their structures and functions in response to specific environmental signals. Researchers at the University of California at San Diego have—for the first time—determined and predictably manipulated a protein assembly energy landscape to achieve a similar result. They did so by combining computation simulations and experiments. They performed all-atom computational simulations to define the energy levels of these lattice structural motions. These simulations showed that the structural motions were primarily driven by the reorganization of water molecules associated with the assembled protein components. The team used the information to redesign the protein lattices to predictably control their opening and closing dynamics and their porosity by both additional mechanical and chemical stimuli. Control of the assembly energy landscape further allowed scientists to incorporate a mechanism to selectively switch the mechanical and chemical modes for controlling these dynamics by calcium binding.

This work was primarily supported by the Department of Energy, Office of Science, Office of Basic Energy Sciences, Materials Sciences and Engineering Division; National Science Foundation (F.P., computation); and the University of California, San Diego National Institutes of Health Molecular Biophysics Training Grant (R.A.). All computer simulations were performed on the Extreme Science and Engineering Discovery Environment, which is supported by the National Science Foundation.