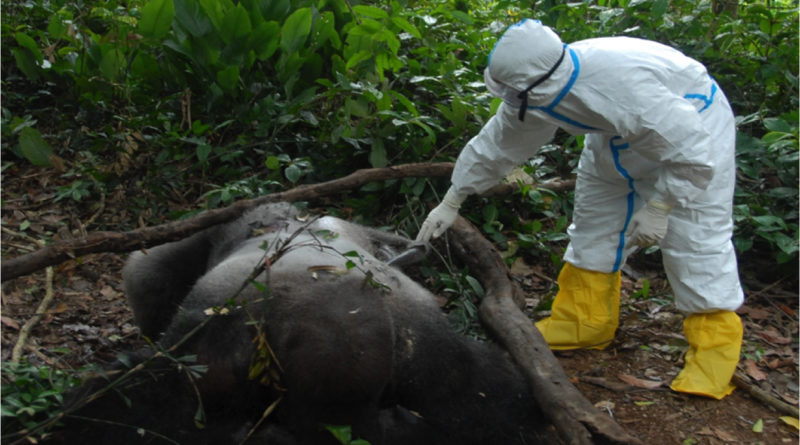 (August 28, 2019) – Human Ebola epidemics, like the current outbreak in the Democratic Republic of Congo, are known to start from a contact with wildlife infected with Ebola virus. In the early 2000s a series of such outbreaks in Central Africa began from different infected animal sources. In response, WCS (Wildlife Conservation Society) and NIH (National Institutes of Health) scientists partnered with the Republic of Congo Ministry of Health to develop a low-cost educational outreach program and surveillance system for wildlife mortality that has continued now for over a decade. While the region is a high-risk zone, Republic of Congo has not had a human case or detection of Ebola virus since 2005. The study authors provide the first description of the early warning system for Ebola in the journal Philosophical Transactions of the Royal Society B.

Comprised of a mix of public health and conservation experts, the authors recognized the utility of monitoring great ape health early on. During Ebola outbreaks from 2001-2005, surveys of closely monitored gorilla populations in Central Africa found mortality from Ebola reached over 90 percent. In fact the western lowland gorilla is classified as critically endangered and the chimpanzee as endangered in part because of Ebola. If an Ebola outbreak among wildlife, or an epizootic, could be detected early on, measures could be put in place to prevent the virus from spilling over and causing a human outbreak.

According to Eeva Kuisma, Health Program Coordinator, WCS Congo Program, “The multitude of challenges facing the current DRC outbreak highlight the value of early detection and proactive prevention and education. These are at the core of our community-based wildlife mortality surveillance program and the only way to succeed is to work together with multi-sectorial partners and in mutual cooperation with the communities.”

A long-term wildlife mortality surveillance system coupled with community education was built over the ensuing years. To date the program has reached over 6,600 people living in rural northern Republic of Congo, and in total the surveillance effort covers an area of approximately 50,000 km2. The surveillance network is comprised of hunter-gathers, park rangers, and WCS-affiliated project personnel who report great ape and mammal carcasses they encounter to a trained response team. To establish and maintain the hunter-gatherer surveillance network the response team visits villages, with permission of the village chief, and delivers a verbal presentation on the basics of Ebola virus transmission to all interested community members. The emphasis is, ‘do not touch, move or bury the carcass and contact the surveillance network immediately’.

Said Dr. Alain Ondzie, Program Veterinarian, WCS Congo Program: “If we want to detect animal mortalities in the forest, both in search of animal diseases and in order to proactively protect communities from animal diseases that can transmit to people, it is crucial to involve hunters, field biologists, rangers, and forest personnel.”

When a report is called in, the team first checks in with the village chief. Then using biosafety methods and lessons learned from past outbreaks, the carcass is sampled and the sample sent for molecular testing at the National Public Health Laboratory in Brazzaville. Test results are available within 3-4 days and communicated back to the village. All 58 carcasses tested to date have been negative for Ebola virus.

Said Dr. Jean-Vivien Mombouli, the General Manager of the National Public Health Laboratory: “Our community outreach and surveillance for potential Ebola virus circulation in animals is helping prevent further Ebola outbreaks in the Republic of Congo. Clearly, the global public health community should take note of these cautionary measures to prevent Ebola based health emergencies across sub-Saharan Africa.”

This pro-active approach engages communities where consumption of animals found dead has been traced to prior Ebola outbreaks. It provides education about Ebola to local communities and they participate in surveillance by reporting carcasses. It is also an extremely cost-efficient surveillance method, particularly given the expense of dealing with a response to a human outbreak. At the time of writing, in the eastern Democratic Republic of Congo the second largest outbreak of Ebola viral disease ever recorded is nearing 2,800 cases, with 1,900 fatalities. Despite increasing control efforts and deployment of an effective vaccine the epidemic is predicted to continue for months with mounting cost in human lives and aid money.

While not every Ebola outbreak will be proceeded by wildlife deaths, this early warning system for wildlife mortality is building trust and awareness and it may help give future responders an upper hand.

This work was supported by the United States Fish and Wildlife Service, the Arcus Foundation, the Paul G. Allen Family Foundation, and Mr. and Mrs. Bradley L. Goldberg. The study also benefited from the United States Agency for International Development (USAID) Emerging Pandemic Threats PREDICT project and German Research Foundation (DFG) grant no. MU 3565/3-0 and German Federal Ministry for Economic Cooperation and Development (BMZ) funding. B.J.F., S.N.S. and V.J.M. are supported by the Division of Intramural Research of the NIAID, NIH. The funders had no role in study design, data collection and analysis, decision to publish or preparation of the manuscript and the findings do not represent the opinions of the US government.