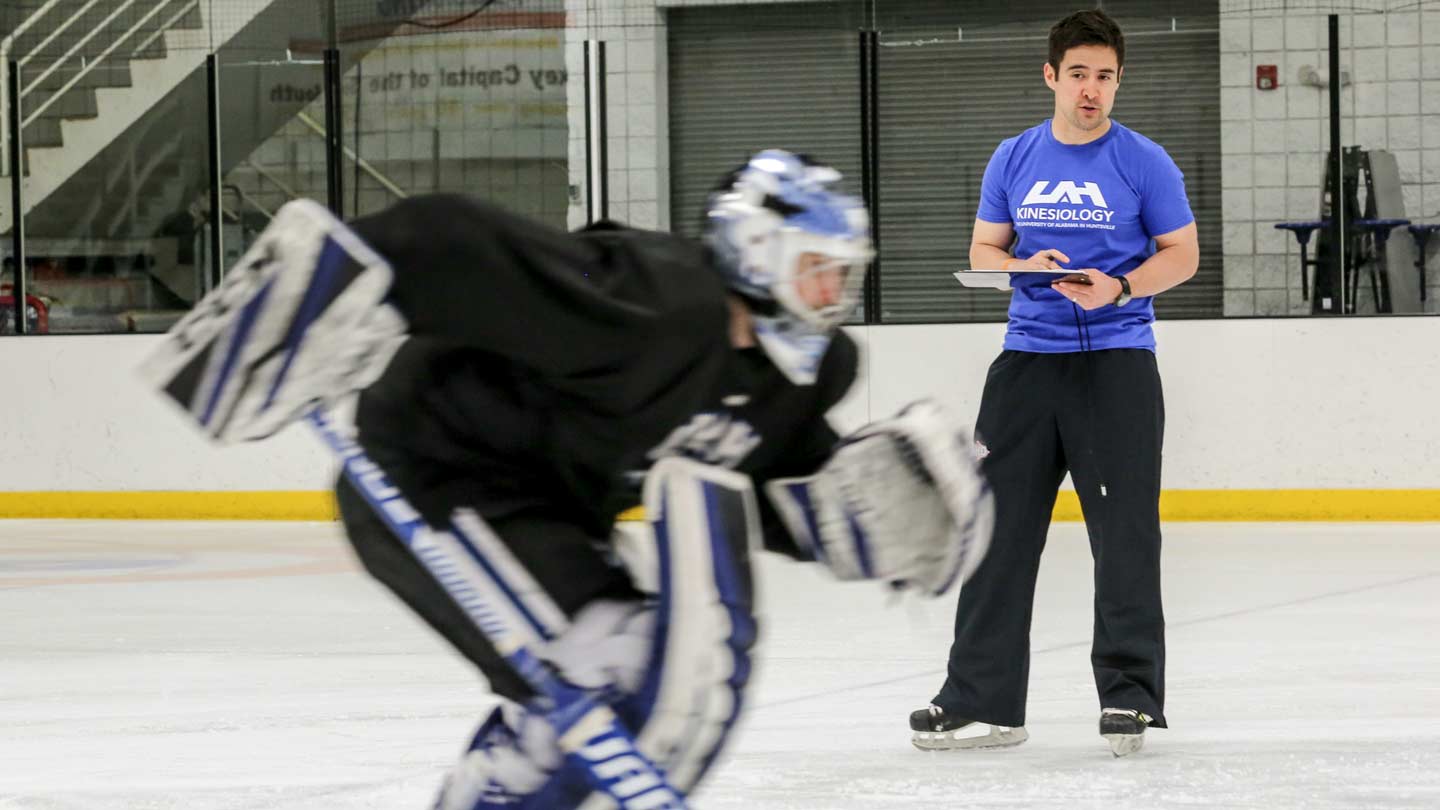 Over the past couple of years, two assistant professors of exercise science – Dr. Paul Whitehead and Dr. Ryan Conners – have taken advantage of the team’s co-location to conduct a series of studies using their complementary expertise. “Paul has a background as a former ice hockey player with an emphasis on biomechanical research, and I have a background as a certified athletic trainer with an emphasis on ice hockey performance and exercise physiology,” says Dr. Conners. “So shortly after Paul’s arrival at UAH in 2017, we realized it would be a great opportunity for us to perform collaborative research with the hockey team.”

The pair began by reaching out to the UAH Athletics Department, to see if the coaches would be willing to let them meet regularly with the players to gather data. “We discussed some of the studies we wanted to build out with the coaching and training staff, and they gave us full access,” says Dr. Whitehead, who worked with the Pittsburgh Penguins prior to joining UAH. “Since then, the coach has made the players available and the players have shown up when we’ve asked them to. A few are even in our kinesiology program!”

Their first study, conducted in conjunction with head strength coach Tyler Shimizu, focused on the effect of in-season demands on lower-body power and fatigue in male collegiate hockey players. “UAH is in a unique situation because it’s landlocked, so our team is either spending hours on a bus or flying across several time zones to compete. That can add up to a minimum of 1,000 miles of travel each weekend away,” says Dr. Whitehead. “We wanted to find out if the players’ lower-body power, which is critical for on-ice success, declined over the course of a competitive sport season as a result of competition, training, and travel.”

To measure lower-body power, the researchers used countermovement jump and squat jump testing, collecting data from 27 players each week across the 18-week season. “What we discovered is that players felt the most fatigued and had the biggest drop in performance during periods of extended travel, with the highest fatigue level recorded after their multiweek trip to Alaska,” says Dr. Whitehead, explaining that each team in the Western Collegiate Hockey Association, of which UAH is a part, must go to Alaska once every five years to play back-to-back weekends. “Conversely, the data began to improve with an extended period of nontravel, confirming our hypothesis that the demands of an ice hockey season causes a decrease in lower-body power.”

The researchers then shared these results in a coauthored paper published in the “Journal of Strength and Conditioning Research,” but soon after, it occurred to them that there was more they could learn by following the players for another year. “It wasn’t built as a multiyear study, but since last year was a block schedule and this year’s schedule is more varied, we decided it would be valuable to compare the players’ power decrements to determine if the type of scheduling makes any difference in performance,” says Dr. Whitehead. “That way, the coaching staff could have a better understanding of how the league-mandated scheduling is impacting the players and they would have the numbers to back up any changes they might want to propose.”

Thus far the preliminary data show that the block scheduling leads to higher variations in fatigue, and even though a more varied travel schedule results in more trips, the impact on overall fatigue is not as apparent. One possible solution for decreasing the impact of travel is to go by bus rather than air. “From a flight vs bus standpoint, we’re seeing that the flights that cross time zones end up eliciting more fatigue. This is compounded by the necessity of selecting cheaper flights, which often add more time to a trip while leaving and arriving at less desirable hours,” he says. “And because the bus is a sleeper bus, the vast majority of players prefer it to flying.”

Two other studies have also given the coaching staff valuable information about how to improve the team’s performance. The first, which focused on live team monitoring to improve training and safety, used a Polar Team Pro System to provide the coaches with immediate and appropriate feedback on an individual athlete’s effort, training load, total distance covered, and time in different speed and sprint zones. “This collaboration between the Department of Kinesiology and the ice hockey team allowed us to utilize state-of-the-art equipment to help provide the players with the most accurate training and recovery tools to improve performance,” says Dr. Conners. These results were detailed in an article coauthored by Dr. Conners, Dr. Whitehead, Tyler Shimizu, and kinesiology graduate Jonathan Bailey, and published in “Strategies: A Journal for Physical and Sport Educators.”

The second, which focused on using the Polar System to assess the demands of competition in collegiate ice hockey players, provided the coaches with real-time data on the players’ heart rate, caloric expenditure, training load, and movement patterns during games. “While one may speculate the demand is greater for skaters than for goalies,” says Dr. Whitehead, “the present data only partially supports that notion. Average heart-rate values are not significantly different across positions.” He presented the findings, coauthored by Dr. Conners, assistant professor Dr. Jeremy Elliott, and Matthew Darnell at the University of Pittsburgh, at the National Strength and Conditioning Association 2019 Annual Meeting in Washington D.C. earlier this month.

When not busy putting UAH’s ice hockey players through their paces as research subjects, Drs. Whitehead and Conners can either be found in the classroom or mentoring students through the university’s Research or Creative Experience for Undergraduates (RCEU) program. Last summer, Noah Pring examined the effects of shin-torso alignment and biomechanical positioning on muscle activity of the lower extremity in ice hockey players, while this summer, UAH lacrosse player Kinta Schott used the Polar System to collect data on high school lacrosse players with an eye toward expanding the study to include UAH’s lacrosse team members.

“We use the RCEU program as sort of a ‘pilot’ for collecting data and setting up future studies,” says Dr. Whitehead, adding that he and Dr. Conners are currently being assisted by two other summer research students on a follow-up to their Polar System study. “I didn’t know what I was going to get out of it, initially, but it has exceeded my expectations. The students benefit by having an independent research project under their belt, and I benefit by meeting my teaching, research, and service requirements and by growing as a mentor.”