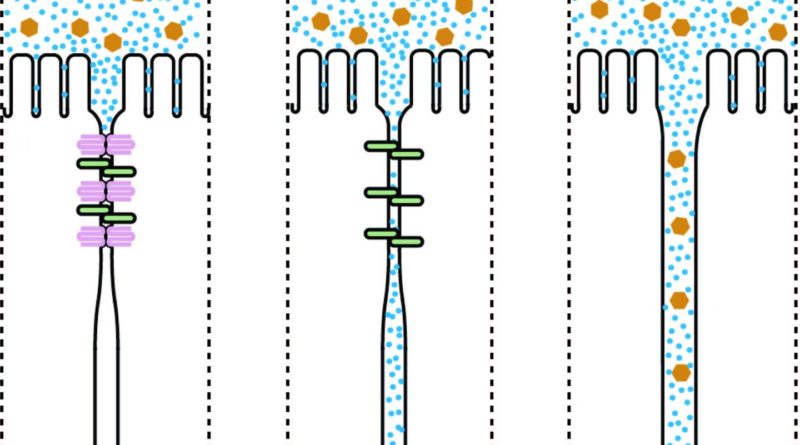 Okazaki, Japan – Epithelia are cell sheets that act as a barrier to protect our body from the external environment. Epithelial barrier is critical to maintain our body homeostasis, and its disruption has been linked to various diseases including atopic dermatitis and inflammatory bowel diseases. In order to maintain the epithelial barrier, it is important to completely seal the space between cells to restrict the movement of substances across the epithelial sheet – and that is the task that tight junctions fulfill.

Previous studies have identified claudins as a critical component of tight junctions. However, the roles of other molecules including JAM-A have been relatively unclear. In the study, the researchers utilized genome editing to systematically knockout claudins, and succeeded to generate epithelial cells lacking claudins for the first time.

In examining these cells, the researchers find that claudins form a barrier against small molecules including ions. To their surprise, loss of claudins did not lead to separation of the two neighboring cells; instead, the two membranes were closely attached to each other, and the barrier against larger molecules such as proteins was still maintained.

“We were puzzled with the results, as claudins were thought to be critical for the epithelial barrier”, said the first author Tetsuhisa Otani. “However, when we noticed that JAM-A was more accumulated at cell junctions lacking claudins, we started to think that JAM-A may be maintaining the barrier against large molecules”, he said.

To test the idea, the researchers further removed JAM-A from the claudin-deficient cells. Indeed, removal of JAM-A led to an expansion of the space between two neighboring cells, and to a disruption of the barrier against large molecules.

This part of information is sourced from https://www.eurekalert.org/pub_releases/2019-08/nion-ctg082719.php