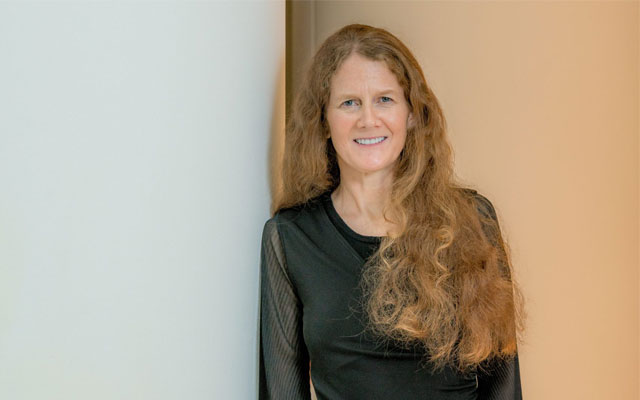 KC Claffy, director of the Center for Applied Data Analysis (CAIDA) at the University of California’s San Diego Supercomputer Center, has been inducted into the Internet Hall of Fame for her pioneering work in the area of internet measurement and analysis.

Claffy, who is also an adjunct professor in UC San Diego’s Computer Science and Engineering Department, was among 11 inductees from six countries around the world, including Peru, Japan, Brazil, Netherlands, Togo and the U.S. They were honored at a special ceremony September 27 in San José, Costa Rica.

“The internet’s design has always enabled people to see a problem, and get to work on solving it,” said Andrew Sullivan, Internet Society President and CEO. “This year’s inductees have given us all great gifts of their creative approaches to issues they saw on the internet. We can take inspiration from them to tackle the next round of challenges.”

In pioneering the field of internet measurement and analysis, Claffy has helped the global scientific research community better understand the internet and how it is used, according to an announcement by the Internet Hall of Fame. In addition to conducting her own research, Claffy and her team have developed infrastructure and methodologies for large-scale internet data collection, analysis, and distribution around the world.

She also observed two historical inflection points: one at the beginning of her career, the commercialization and privatization of the Internet infrastructure, and the second emerging now, amidst recognition that “society is increasingly exposed to a range of harms serious enough to create a public interest in mitigating them.” Claffy also noted that this inflection point toward regulation is “scarier…, because mistakes by governments are more dangerous and take longer to undo than mistakes by the private sector.”

Claffy published the first of many papers on internet traffic measurement and analysis in 1992, and in 1997 founded CAIDA. The center initially focused on data that informed the technical community, but now also examines the economic and policy context that defines the internet ecosystem, including analysis related to infrastructure security and stability, the mutual interdependence of architecture and policy, and the ethics of information technology research.

A series of brief videos by Claffy explaining the issue of net neutrality and why we need to measure the internet can be found here.

Located on the University of California San Diego campus, SDSC is considered a leader in data-intensive computing and cyberinfrastructure, providing resources, services, and expertise to the national research community, including industry and academia. Cyberinfrastructure refers to an accessible, integrated network of computer-based resources and expertise, focused on accelerating scientific inquiry and discovery. SDSC supports hundreds of multidisciplinary programs spanning a wide variety of domains, from earth sciences and biology to astrophysics, bioinformatics, and health IT. SDSC’s petascale Comet supercomputer is a key resource within the National Science Foundation’s XSEDE (eXtreme Science and Engineering Discovery Environment) program.