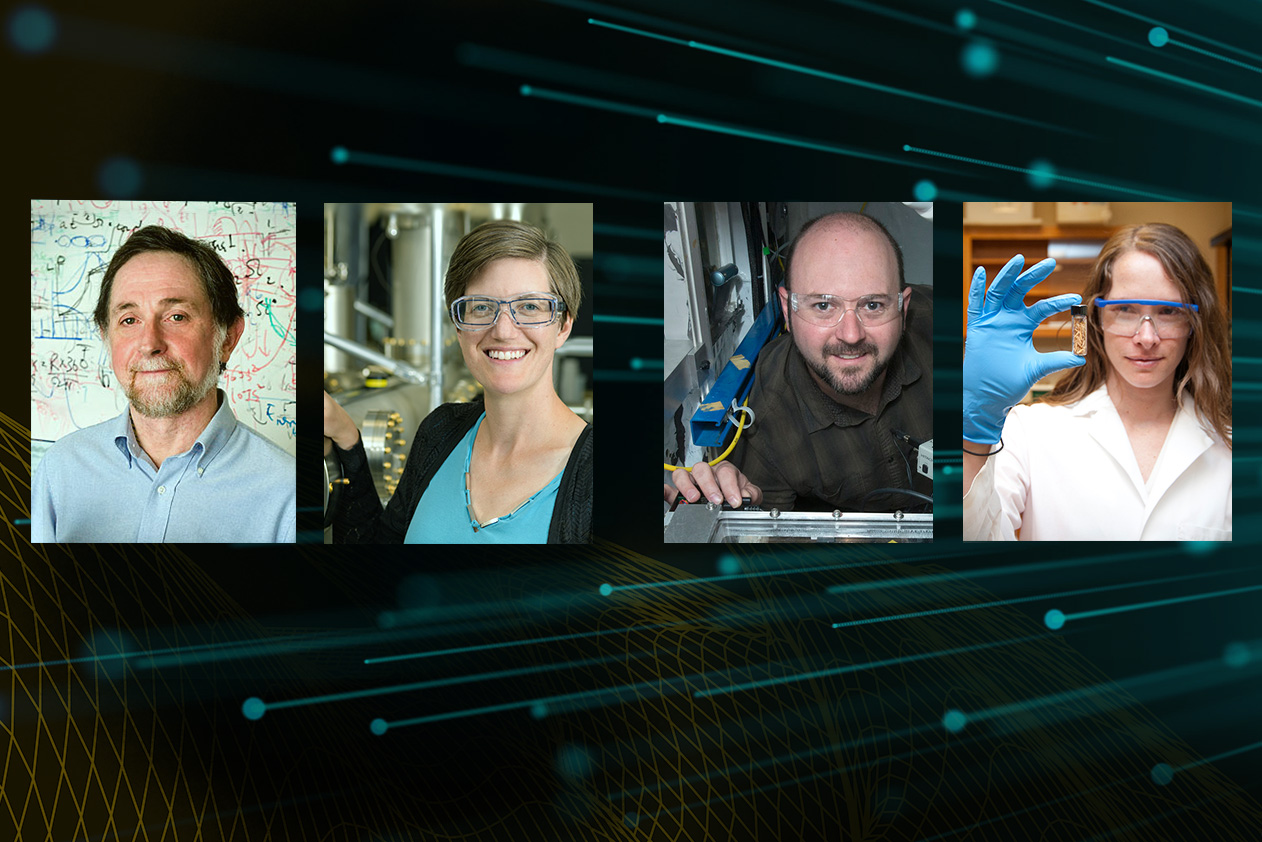 UPTON, NY—The U.S. Department of Energy’s (DOE) Brookhaven National Laboratory and the University of Delaware (UD) have begun a two-year joint initiative to promote collaborative research in new areas of complementary strength and strategic importance. Though Brookhaven Lab and UD already have a tradition of collaboration, especially in catalysis, this initiative encourages partnerships in strategic areas where that tradition does not yet exist. After considering several potential areas, a committee from Brookhaven and UD selected two projects—one on rice soil chemistry and the other on quantum materials—for the new initiative. For each project, one graduate student based at Brookhaven and one graduate student from UD will work with and be supervised by a principal investigator from each respective institution. The research, to start in October 2019, is funded separately by the two institutions. Brookhaven funding is provided through its Laboratory-Directed Research and Development program, which promotes highly innovative and exploratory research that supports the Lab’s mission and areas for growth.

The rice soil chemistry project, “The rice of the future: How growing practices can decrease human exposure to toxins,” is co-led by Ryan Tappero, lead scientist at the X-ray Fluorescence Microprobe (XFM) beamline at the National Synchrotron Light Source II (NSLS-II)—a DOE Office of Science User Facility at Brookhaven—and Angelia Seyfferth, an associate professor of biogeochemistry and plant-soil interactions in UD’s College of Agriculture and Natural Resources.

“Our existing collaborations with UD are producing exceptional results, and we hope that we can expand this success to other strategic areas of research through the joint initiative,” said Priscilla Antunez, assistant director for strategic partnerships at the Center for Functional Nanomaterials (CFN)—another DOE Office of Science User Facility at Brookhaven—and coordinator of the Brookhaven-UD relationship.

“The University of Delaware is pleased and excited to expand research collaborations with Brookhaven National Laboratory,” said Charlie Riordan, vice president for research, scholarship and innovation, and professor of chemistry and biochemistry. “Our work together is destined to have positive and far-reaching impacts, of benefit to our students and to society.”

Understanding the distribution of toxic and nutrient metals in rice grain

Rice is a staple food consumed throughout the world, so it is critical to ensure that rice is safe for human consumption. Most rice is grown under flooded soil conditions, which mobilize the toxic and cancer-causing element arsenic (As) that gets absorbed by the roots of rice plants. Moreover, the amount of mobilized As increases at higher temperatures, posing food safety concerns related to climate change. Though approaches to reduce soil flooding (and thus As mobilization) have been proposed, they result in the uptake of a different but also toxic element: cadmium (Cd).

Seyfferth has been pioneering research on the impact of incorporating silicon (Si)—a rice nutrient—into the soil to reduce both As and Cd accumulation in the rice grain.

“Silicon is a critical nutrient for rice and protects the plant against stress,” said Seyfferth. “It also turns out that the common form of arsenic present in flooded rice paddies is chemically similar to dissolved silicon and they both are taken up by roots via the same pathway. By increasing silicon, we can limit arsenic uptake by roots. This leads to less arsenic in the rice grain and higher yield even under flooded conditions that already minimize cadmium uptake. Silicon also causes plants to grow larger, which decreases plant concentrations of toxic elements.”

Now, Seyfferth will collaborate with Tappero and NSLS-II scientific associate Randy Smith to understand how rice-growing practices and conditions influence the distribution of As and Cd, as well as the important micronutrients zinc (Zn) and iron (Fe).

At UD, the scientists will use laser ablation inductively coupled plasma mass spectrometry—an analytical chemistry technique to map elemental composition—as a screening tool to identify rice tissue samples for high-resolution imaging and spectroscopy at NSLS-II’s XFM beamline. At NSLS-II, they will perform micro-focused x-ray fluorescence imaging and x-ray absorption spectroscopy experiments. In both techniques, x-rays are directed at the sample to induce a response that is characteristic of the sample’s elemental composition (fluorescence emission) or its local chemical states and electronic structure (absorption spectra). The scientists will grow the samples under a variety of environmental conditions, including elevated Si concentrations, flooding levels, and temperatures. These studies also will help optimize rhizosphere microcosms—imaging devices with a window into the region of soil directly near plant roots (rhizosphere)—that Tappero is developing to visualize As release and uptake by rice roots.

“Custom sample environments developed as part of this project with UD Plant and Soil Sciences will benefit other XFM users that aim to image trace elements in situ at the soil-root interface,” said Tappero.

When materials have nanoscale (billionths of a meter) dimensions, their electrons can only occupy specific (discrete) energy levels. This phenomenon, called quantum confinement, occurs when the nanostructures—for example, wires or dots—are smaller than a critical length scale. The unique properties of such nanostructures are of interest for many applications, including quantum computers.

To date, much of the research on quantum confinement has focused on semiconductor materials, which have an electrical conductivity in between that of conductors (high conductivity) and insulators (low conductivity). But recently, scientists have been turning their attention toward a new class of materials that behave as insulators internally but conductors on the surface (i.e., electrons can only move along the surface). The surfaces of these topological insulators are special because they are protected from backscattering, which occurs when electrons hit atomic defects or other imperfections in a crystal structure or move in response to vibrations of the atoms. The scattering of electrons is problematic because it interferes with the flow of electric current, causing energy dissipation and thus loss.

Some scientists have theoretically proposed that the surfaces of topological insulators should also have electrons of discrete energy levels that are “topologically” protected. Law and Johnson will test this theory by growing self-assembled quantum dots from a topological insulator made of the elements bismuth, antimony, and telluride and measuring the dots’ energy level spectrum.

“Topological insulators are already known to be interesting materials from both a physics and an engineering perspective,” said Law. “What isn’t known is how they behave when confined to extremely small scales. The collaboration between UD and Brookhaven will allow us to address these questions directly, and in so doing, uncover new physics and discover new applications for these materials.”

At UD, Law will grow samples of varying size and chemical composition with a thin-film deposition technique called molecular beam epitaxy and characterize the structure of the samples using x-ray diffraction and microscopy techniques. Then, at Brookhaven, Johnson and team member Dario Stacchiola—group leader of the CFN Interface Science and Catalysis Group—will measure the samples’ energy spectra through scanning tunneling spectroscopy (STS) and angle-resolved photoemission spectroscopy (ARPES). In STS, a voltage is applied between a sharp metallic tip and a sample, allowing electrons to tunnel between the two. The amount of electrical current is proportional to the density of states—the number of electrons per unit volume over a given energy level. In ARPES, x-ray or ultraviolet light is directed on the sample, and the energy and momentum of the emitted electrons are measured.

“This study will allow us to understand the electronic structure of topological insulators at the nanoscale, by measuring their quantized energy level spectrum,” said Johnson. “Our research could help us answer fundamental questions about the physics of topological systems. It could also be used as the foundation to develop qubits—the counterpart to the binary bits used in today’s computers—that operate at room temperature over extended distances for more efficient computing.”

The University of Delaware traces its beginnings to a small private academy established in 1743. Today, UD is a research-intensive, technologically advanced institution offering more than 150 academic majors across eight colleges, serving more than 24,000 undergraduate and graduate students. Our distinguished faculty includes internationally renowned authors, scientists and artists. The Carnegie Foundation for the Advancement of Teaching classifies UD as a research university having very high research activity—a designation accorded fewer than 3 percent of U.S. colleges and universities. UD also is classified as a community engaged university.