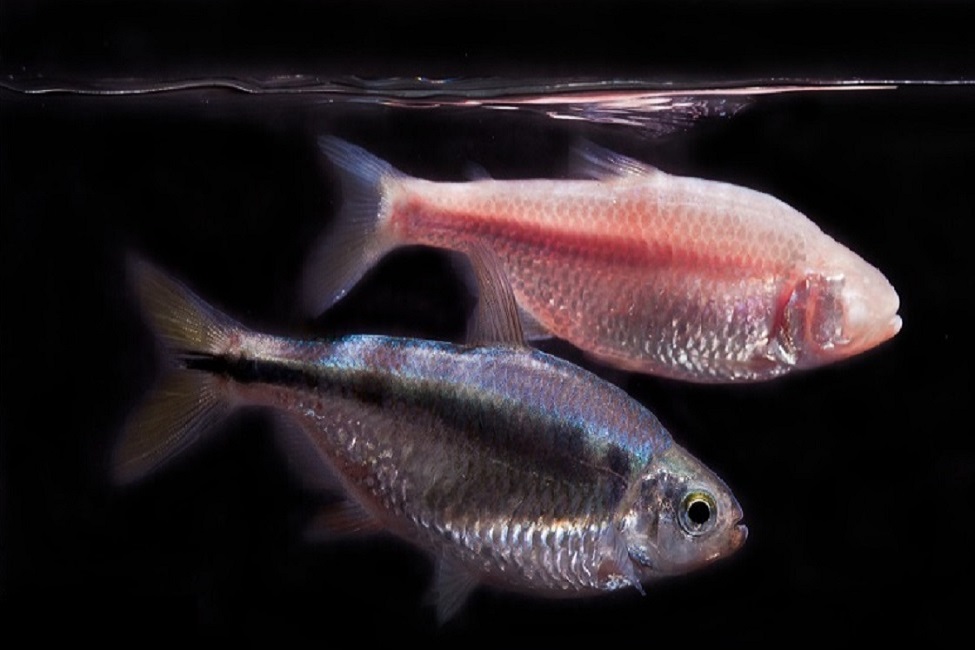 The ability to detect threatening stimuli and initiate an escape response is critical for survival and under stringent evolutionary pressure. To detect predators, fish use a number of sensory systems including olfaction (smell) and vision, which contribute to the activation of arousal systems. Surprisingly, little is known about the neural mechanisms through which ecological perturbation shapes the evolution of escape response. When startled, do all fish respond the same way?

A few fish, like Mexican cavefish, Astyanax mexicanus, have evolved in unique environments without any predators. To determine how this lack of predation impacts escape responses that are highly stereotyped across fish species, researchers from Florida Atlantic University’s Charles E. Schmidt College of Science and Harriet L. Wilkes Honors College explored the tiny A. mexicanus to determine if there are evolved difference in the species. A. mexicanus exist as surface fish that inhabit rivers in Mexico and Southern Texas and as more than 30 geographically isolated cave‐dwelling populations of the same species.

The ecology of caves differs dramatically from the surface habitat, resulting in distinct morphological and behavioral phenotypes in A. mexicanus. Cave populations live in environments without light, which is thought to contribute to the evolution of albinism, eye‐loss, and circadian rhythm. Because they lack predators they might also lack the selective pressure to avoid predators. Dramatic differences in these cavefish populations combined with the robust ecological differences suggest that the startle reflex could indeed differ between populations of A. mexicanus.

To put this theory to the test, researchers elicited “C‐start” responses using acoustic stimuli and high-speed videography in multiple cavefish populations and compared responses to eyed surface fish. The C‐start escape response represents a primary mechanism for predator avoidance in fish and amphibians. C-start gets its name from the “c‐shaped” curve a fish’s body forms during the first stage of the escape response, which is followed by a smaller counter‐bend and then rapid swimming.

Researchers found that C-start is present in river-dwelling surface fish and multiple populations of cavefish, but response kinematics and probability differed between populations. The Pachón population of cavefish exhibited an increased response probability, a slower response latency and speed, and reduction of the maximum bend angle, revealing evolved differences between surface and cave populations. Analysis of the responses of two other independently evolved populations of cavefish, revealed the repeated evolution of reduced angular speed. Investigation of surface‐cave hybrids showed a correlation between angular speed and peak angle, suggesting that these two kinematic characteristics are related at the genetic or functional levels.

“These findings show that even the most highly conserved behaviors have evolved differences in the cave environment,” said Alex Keene, Ph.D., lead author and an associate professor of biological sciences, FAU’s Charles E. Schmidt College of Science. “It puts us in a position to identify the biological causes that underlie the reduced response probability and other changes we observed between cavefish and surface fish.”

Despite having no eyes, cavefish could detect light and sense looming stimuli, raising the possibility that light modulates their C‐start response. To assess the influence of visual input on the C‐start responses of surface fish and cavefish, researchers assayed both populations under light and dark conditions. The presence of light had no detectable effect on response probability, response latency, or angular speed in cavefish or surface fish. It did however, influence peak bend angle. In the dark conditions, surface fish displayed an increase in peak bend angle compared to cavefish. Although they were able to perceive light at this age, the presence or absence of light had no observable effect on the responses of Pachón cavefish.

To assess differences in responsiveness to acoustic stimuli, researchers quantified the probability of C‐start initiation in surface fish and Pachón cavefish at multiple vibration intensities. They found that Pachón cavefish were more likely than surface fish to initiate a C‐start in response to vibrations of higher intensities (31 and 35 decibels, but not 28 decibels).

“Interestingly, all cave populations analyzed in our study exhibited decreased angular speed. Furthermore, it is likely that a slower latency, such as that of Pachόn larvae, decreases the likelihood of successful evasion,” said Alexandra Paz, first author, an FAU doctoral student and a research assistant in the Department of Biological Sciences. “These data suggest that the C‐start responses of cavefish, especially from the Pachόn population, may be less effective for successful predator evasion. Because no predators have been identified in the caves, it is possible that this change is a result of diminished predation in the cave environment.”