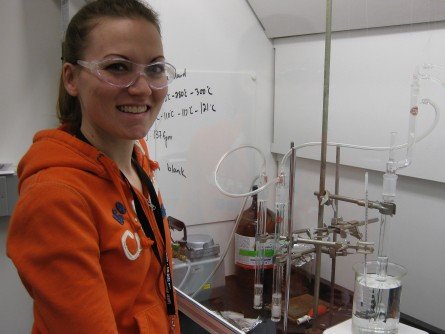 Meteorites long have been mysterious and awe inspiring for human beings, but research conducted at Boise State University illustrates a new source of fascination: researchers have discovered organometallic compounds containing both cyanide and carbon monoxide in select rocks from outer space, which may have been significant for the origin of life on Earth. Their findings have been published in the science journal Nature Communications.

Cyanide is thought to be crucial for the origin of life, as it is involved in the abiotic synthesis of organic compounds like amino acids and nucleobases, which are the building blocks of proteins and nucleic acids used by all known forms of life.

“When most people think of cyanide, they think of spy movies – a guy swallowing a pill, foaming at the mouth and dying, but cyanide was probably an essential compound for building molecules essential to life,” explained Karen Smith, lead author and a senior research scientist at Boise State.

“When we started this project, we wanted to see if there was any ‘leftover’ cyanide in meteorites that could be indicative of the synthesis of meteoritic amino acids or nucleobases,” Callahan said.

The duo devised a plan to extract cyanide from the rock and trap it. They began by heating up meteorite specimens in acid to create hydrogen cyanide – a gas – and trap it in a basic solution. They then used a method called chemical derivatization, along with techniques of liquid chromatography and mass spectrometry, to measure the amount of cyanide present in these solutions. They found that the meteorites containing cyanide belong to a classification called CM chondrite meteorites. Other types of meteorites tested, including a Martian meteorite, contained no cyanide.

“Although CM chondrites are known to be an organic-rich group of meteorites, it’s still surprising that we can detect cyanide in them since it is such a reactive molecule,” Callahan said.

The team also was surprised to discover what form of cyanide existed in meteorites.

“At first, we thought it was cyanide in the form of a cyanide polymer but it’s not,” Smith said.

Intriguingly, Smith and Callahan discovered cyanide binding with inorganic metals, including iron, to form a stable complex. They identified two different iron cyano-carbonyl complexes in meteorites using high-resolution liquid chromatography-mass spectrometry. Their results suggest that these compounds also were present on early Earth, before life began, during a time period when Earth was constantly being bombarded by meteorites.

“One of the most interesting observations from our study is that these iron cyano-carbonyl complexes resemble portions of the active sites of nickel-iron hydrogenases,” Callahan said.

Nickel-iron hydrogenases are enzymes that are responsible for hydrogen metabolism and are commonly found in bacteria and archaea. These enzymes are widely thought to be ancient in origin.

“Nickel-iron hydrogenases are large proteins, but the active site – the region where chemical reactions take place – happens to be a much smaller organometallic compound contained within the protein. This catalytic site is unusual because you see an iron atom bound to carbon monoxide and cyanide ligands, however, this arrangement is always present in these enzymes,” added Callahan.

“While it’s quite common to see a cyanide anion as an ancillary ligand in organometallic chemistry, it’s rare to observe it coordinated to a metal ion in a biological system,” commented Eric Brown, a professor of inorganic chemistry at Boise State who was not affiliated with this study.

“When you compare the structure of these iron cyano-carbonyl complexes in meteorites to these active sites in hydrogenases, it makes you wonder if there was a link between the two,” Smith added. “It’s possible that iron cyano-carbonyl complexes may have been a precursor to these active sites and later incorporated into proteins billions of years ago. These complexes probably acted as sources of cyanide on early Earth as well.”

The research was funded by the NASA Emerging Worlds Program, NASA Astrobiology Institute, and the NASA Earth and Space Science Fellowship. The team included Smith, Callahan, and colleagues at Penn State University, University of Maryland and the NASA Goddard Space Flight Center.

Coverage of the research can be found on NASA’s website here.