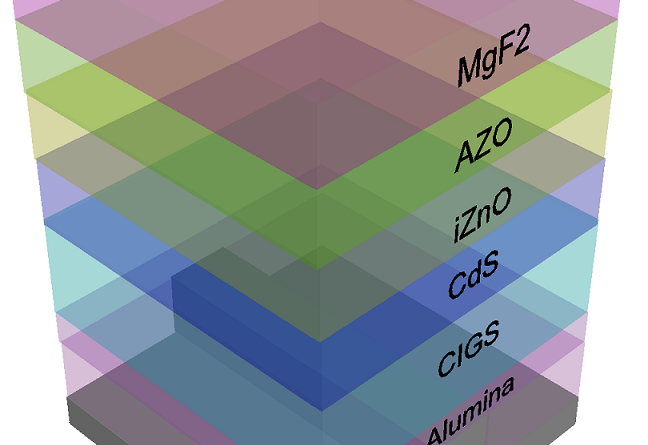 Researchers at Penn State and Delaware have developed a theoretical method to improve the efficiency of thin-film solar cells by up to 33 percent. Flexible thin-film solar cells are needed to supply electrical power to fabrics, clothing, back packs and anywhere that a local autonomous power supply is required.

Rooftop solar based on silicon has made solar energy cheap and readily available. But silicon is rigid and heavy, suitable for large-scale power production but not for portable power. Currently, flexible solar commands around 5 percent of the solar cell market. In order to increase the use of flexible solar it is important to increase the conversion efficiency from its current level of around 21 percent. By tweaking a couple of layers in the solar cell, the researchers believe they can increase efficiency to 27.8 percent.

By varying the semiconductor bandgap on a gradient, they were able to improve the capture of solar energy and increase efficiency by a third. A second tweak involves including a rough reflective layer which helps to slow the recombination of electrons and their holes, again improving efficiency.

In other work, the team has shown that they can increase the efficiency of another type of thin-film cell from 12 percent to 21 percent, an improvement of 80 percent.

“This tells us the opportunity for significant improvement exists,” he says.

Other opportunities have also arisen, including optimizing solar cells for interior lighting and for developing colored solar cells that can be incorporated into designs and clothing.

The researchers report their finding in a recent edition of the journal Applied Optics in a paper tilted “Efficiency enhancement of ultrathin CIGS solar cells by optimal bandgap grading.” Additional authors include lead author Faiz Ahmad, a Ph.D. candidate in the Lakhtakia group, and Tom Anderson and Peter Monk, University of Delaware.

Funding was provided by the National Science Foundation and the Charles Godfrey Binder Endowment.