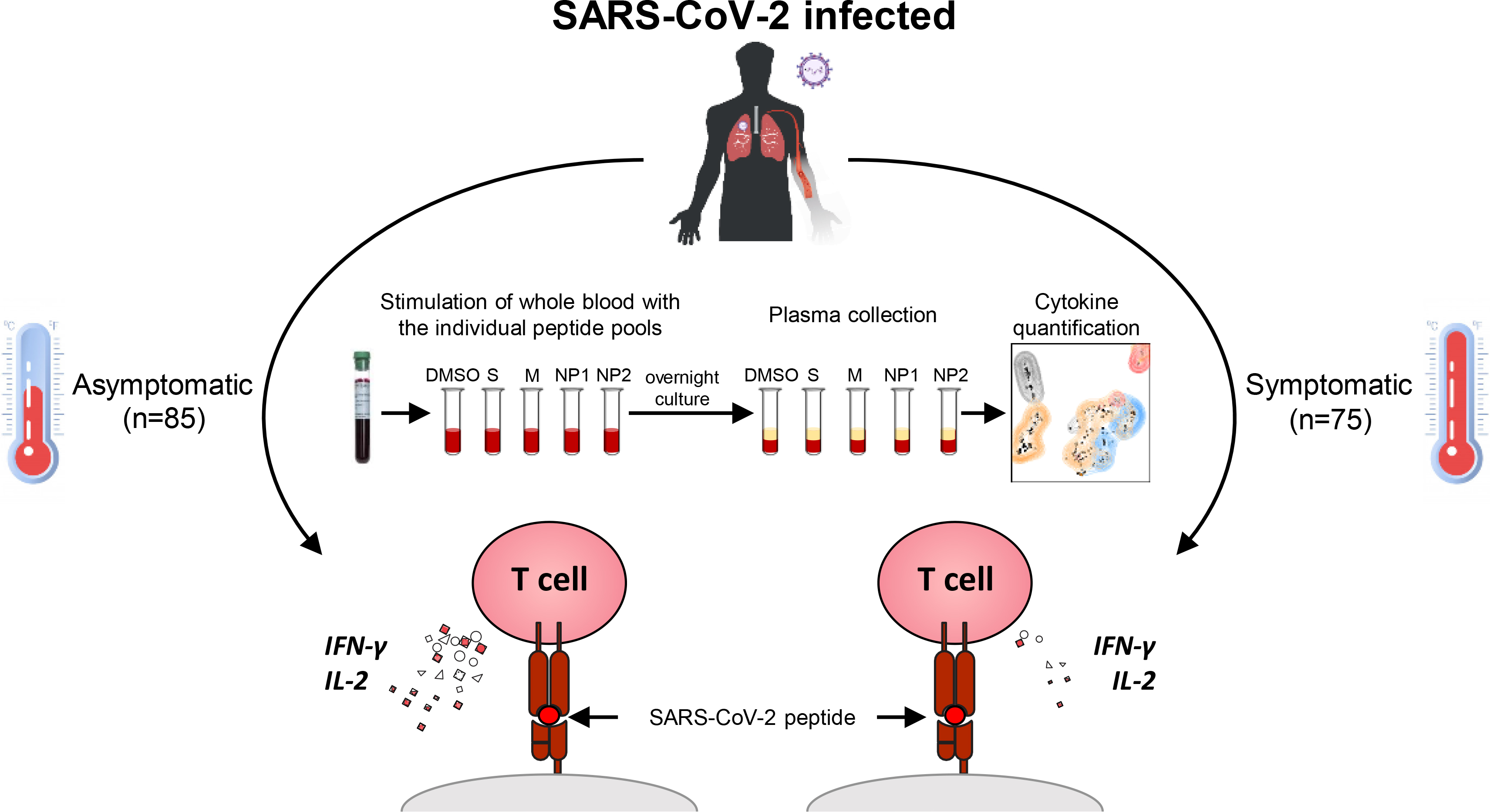 By analyzing blood samples from individuals infected with SARS-CoV-2, researchers in Singapore have begun to unpack the different responses by the body’s T cells that determine whether or not an individual develops COVID-19. The study, published today in the Journal of Experimental Medicine (JEM), suggests that clearing the virus without developing symptoms requires T cells to mount an efficient immune response that produces a careful balance of pro- and anti-inflammatory molecules.

Many people infected with the SARS-CoV-2 virus do not develop any symptoms, and the infection is cleared by both antibodies and T cells that specifically recognize the virus. In some cases, however, this protective immune response can trigger excessive inflammation that damages tissues and causes many of the symptoms associated with COVID-19.

What determines whether or not an infected individual develops symptoms remains unknown. Some studies have suggested that asymptomatic individuals produce fewer anti–SARS-CoV-2 antibodies than individuals that develop symptoms. But whether their T cell responses are also reduced was unclear.

“Asymptomatic individuals constitute a variable but often large proportion of infected individuals, and they should hold the key to understanding the immune response capable of controlling the virus without triggering pathological processes,” says Antonio Bertoletti, a professor at the Duke-NUS Medical School in Singapore.

Bertoletti and colleagues, including Nina Le Bert, a senior research fellow at Duke-NUS Medical School, and Clarence C. Tam, an assistant professor at the National University of Singapore Saw Swee Hock School of Public Health, studied a group of migrant workers who were exposed to SARS-CoV-2 in their dormitories in April 2020. Over the course of six weeks, the researchers took regular blood samples from 85 workers who were infected but remained asymptomatic and compared their T cells to those of 75 patients who were hospitalized with mild to moderate COVID-19.

Surprisingly, the researchers found that, shortly after infection, the frequency of T cells recognizing SARS-CoV-2 was similar in both asymptomatic individuals and COVID-19 patients. “The overall magnitude of T cell responses against different viral proteins was similar in both cohorts,”  Nina Le Bert  says.

However, the T cells of asymptomatic individuals produced greater amounts of two proteins called IFN-γ and IL-2. These signaling proteins, or cytokines, help to coordinate the immune system’s response to viruses and other pathogens.

Accordingly, the immune response to SARS-CoV-2 appears to be more coordinated in asymptomatic individuals. Bertoletti and colleagues challenged some of the blood samples with fragments of viral proteins and found that the immune cells of asymptomatic individuals produce a balanced, well-proportioned mix of pro- and anti-inflammatory molecules. In contrast, the immune cells of COVID-19 patients produced a disproportionate amount of proinflammatory molecules.

“Overall, our study suggests that asymptomatic SARS-CoV-2–infected individuals are not characterized by a weak antiviral immunity; on the contrary, they mount a highly efficient and balanced anti-viral cellular response that protects the host without causing any apparent pathology,” the researchers say.

The molecular details of this response, and how it safely controls SARS-CoV-2 infections, can now be studied in more detail. However, because most of the participants in the study were male and of Indian/Bangladeshi origin, the researchers caution that their results will need to be confirmed in women and other populations around the world.