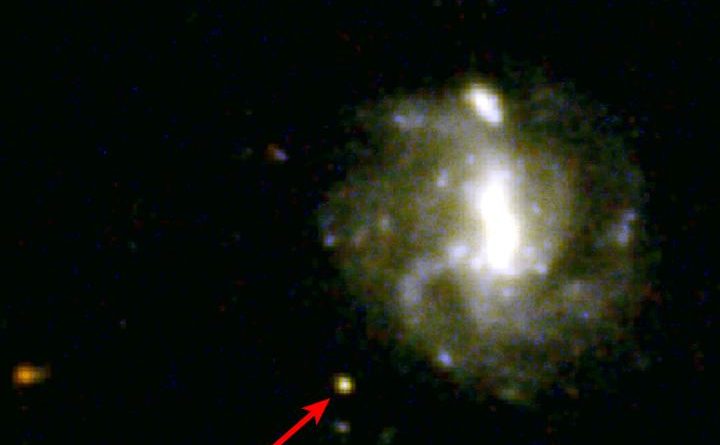 On August 17, 2017, scientists made history with the first direct observation of a merger between two neutron stars. It was the first cosmic event detected in both gravitational waves and the entire spectrum of light, from gamma rays to radio emissions.

The impact also created a kilonova–a turbocharged explosion that instantly forged several hundred planets’ worth of gold and platinum. The observations provided the first compelling evidence that kilonovae produce large quantities of heavy metals, a finding long predicted by theory. Astronomers suspect that all of the gold and platinum on Earth formed as a result of ancient kilonovae created during neutron star collisions.

Based on data from the 2017 event, first spotted by the Laser Interferometer Gravitational-wave Observatory (LIGO), astronomers began to adjust their assumptions of how a kilonova should appear to Earth-bound observers. A team led by Eleonora Troja, an associate research scientist in the University of Maryland’s Department of Astronomy, re-examined data from a gamma-ray burst spotted in August 2016 and found new evidence for a kilonova that went unnoticed during the initial observations.

NASA’s Neil Gehrels Swift Observatory began tracking the 2016 event, named GRB160821B, minutes after it was detected. The early catch enabled the research team to gather new insights that were missing from the kilonova observations of the LIGO event, which did not begin until nearly 12 hours after the initial collision. Troja and her colleagues reported these new findings in the journal

“The 2016 event was very exciting at first. It was nearby and visible with every major telescope, including NASA’s Hubble Space Telescope. But it didn’t match our predictions–we expected to see the infrared emission become brighter and brighter over several weeks,” said Troja, who also has an appointment at NASA’s Goddard Space Flight Center. “Ten days after the event, barely any signal remained. We were all so disappointed. Then, a year later, the LIGO event happened. We looked at our old data with new eyes and realized we had indeed caught a kilonova in 2016. It was a nearly perfect match. The infrared data for both events have similar luminosities and exactly the same time scale.”

According to Troja, the information collected from the 2016 event does not contain as much detail as the observations of the LIGO event. But the coverage of those first few hours–missing from the record of the LIGO event–revealed important new insights into the early stages of a kilonova. For example, the team got their first look at the new object that remained after the collision, which was not visible in the LIGO event data.

“The remnant could be a highly magnetized, hypermassive neutron star known as a magnetar, which survived the collision and then collapsed into a black hole,” said Geoffrey Ryan, a Joint Space-Science Institute (JSI) Prize Postdoctoral Fellow in the UMD Department of Astronomy and a co-author of the research paper. “This is interesting, because theory suggests that a magnetar should slow or even stop the production of heavy metals, which is the ultimate source of a kilonova’s infrared light signature. Our analysis suggests that heavy metals are somehow able to escape the quenching influence of the remnant object.”

Troja and her colleagues plan to apply the lessons they learned to re-evaluate past events, while also improving their approach to future observations. A number of candidate events have been identified with optical light observations, but Troja is more interested in events with a strong infrared light signature–the telltale indicator of heavy metal production.

“The very bright infrared signal from this event arguably makes it the clearest kilonova we have observed in the distant universe,” Troja said. “I’m very much interested in how kilonova properties change with different progenitors and final remnants. As we observe more of these events, we may learn that there are many different types of kilonovae all in the same family, as is the case with the many different types of supernovae. It’s so exciting to be shaping our knowledge in real time.”


About the College of Computer, Mathematical, and Natural Sciences

The College of Computer, Mathematical, and Natural Sciences at the University of Maryland educates more than 9,000 future scientific leaders in its undergraduate and graduate programs each year. The college’s 10 departments and more than a dozen interdisciplinary research centers foster scientific discovery with annual sponsored research funding exceeding $175 million.

This part of information is sourced from https://www.eurekalert.org/pub_releases/2019-08/uom-afa082719.php