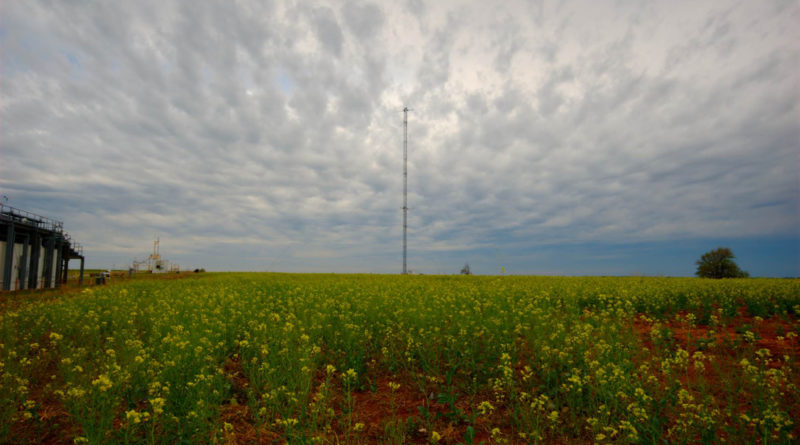 On summer evenings, high above the surface of the southern Great Plains, a phenomenon occurs that contributes significantly to the climate dynamics of the region. Called low-level jets, these winds can reach speeds upward of 55 mph, and they play a role in the transport of heat and moisture into the region and contribute to the development of tornadoes and the generation of wind energy.

Obtaining continual profiles of wind, temperature and humidity associated with these low-level jets is important to improve the accuracy of atmospheric models like the National Oceanic and Atmospheric Administration’s (NOAA) High-Resolution Rapid Refresh model, which provides forecasts associated with hazardous weather.

NOAA and similar organizations around the world rely on the Atmospheric Radiation Measurement (ARM) User Facility to provide these types of long-term observations of the atmosphere — whether in Oklahoma or Oliktok Point, Alaska. Sponsored by the U.S. Department of Energy (DOE) Office of Science, ARM’s mission is to advance our understanding of cloud, aerosol, precipitation and radiation processes and provide the data to better represent these phenomena in global-scale models.

ARM serves as an exemplary illustration of DOE collaboration. Nine DOE national laboratories, including Argonne National Laboratory, are involved in the operation or management of three fixed and three mobile atmospheric observatories, as well as the operation and maintenance of 400 meteorological instruments, and an aerial facility that includes a plane and unmanned aerial systems.

“I think the benefits of such a large collaboration are the domain expertise at the various laboratories, as well as regional expertise,” said James Mather, ARM Technical Director at Pacific Northwest National Laboratory. ​“And with ARM, there’s an opportunity to leverage the capabilities of each laboratory. I’m very proud of how the whole thing comes together,” he added. ​“The ARM facility is often held up as how a multi-laboratory program can function.”

Where in the World Are They?

ARM’s three fixed stations are located at points around the globe that speak to the diversity of Earth’s climate: the North Slope of Alaska observatory is near the town of Utqiagvik; the Eastern North Atlantic observatory is located on Graciosa Island, in the Azores, Portugal; and the Southern Great Plains (SGP) facilities are located in Oklahoma and Kansas.

The mobile observatories and their users get to see a little more of the world, but they consume much of ARM’s internal activities. Like moving a mega rock n’ roll band across country, ARM personnel deploy ten 20-foot-long shipping containers loaded with approximately 50 instruments to areas of climatic interest, from Antarctica and the Pacific Ocean, to Africa, Europe and China.

These field campaigns often last a year, and the science impact varies based on location and other factors, like how well the deployed equipment functions, funding and, well, nature.

“When you do laboratory experiments, you can set things up the way you want, you can do as many iterations as you want,” noted Mather. ​“But when you do an atmospheric study, you rely on what nature brings.”

Longer campaigns allow investigators the opportunity to observe similar types of conditions multiple times to determine whether an event was an anomaly or part of a larger pattern and to better understand the variability of certain phenomena.

In addition to its scientists conducting climate research using ARM data, Argonne also manages SGP observatory. The oldest and largest of the fixed ARM sites, SGP’s central facility is located in Lamont, Oklahoma — where, not so ironically, the wind comes sweeping down the plain — its 17 extended facilities sprinkled liberally across north-central Oklahoma and southern Kansas.

The expansive nature of the SGP and the work it does is intimately tied to its geography. Located near other research institutions, like the National Weather Service Storm Prediction Center and the National Severe Storms Laboratory, it encompasses a variety of rural environments and, perhaps more importantly, is situated within a climatic transition zone.

“That’s where you have four seasons,” explained Argonne’s Mike Ritsche, SGP site manager. ​“Being able to measure what’s happening above your head every day during these transition periods is important because the weather is always different.”

To provide a continual record of this transition zone, SGP personnel conduct four weather balloon launches a day, every six hours, 365 days a year. The balloons measure temperature, relative humidity, wind speed and direction and atmospheric pressure, providing an exacting vertical profile of the atmosphere, from the surface through the lowest layer of the atmosphere, where most weather occurs.

“The SGP is perhaps the best atmospheric observatory in the world …They measure more variables with different instruments and provide a more complete picture of what is happening in the atmosphere than you could find anywhere else.”  — Dave Turner, NOAA

The most heavily instrumented of the ARM facilities, SGP is equipped with nearly 200 instruments, like Doppler lidars and cloud radars that provide users with additional ways to visualize the atmosphere vertically and, more specifically, the vertical distribution of clouds.

This variability in the climate and geography of the region, combined with SGP’s vast toolkit, creates a natural lab for measuring the dynamics of clouds and aerosols and how they interact with the earth’s surface, which SGP researchers also measure and characterize.

“The moisture profile coming off of a wheat field versus a pasture versus a forested area are all different,” said Nicki Hickmon, ARM associate director for operations. ​“That difference, along with other variables, determines whether we’re going to get clouds or just some haze. How is that going to affect the solar radiation coming in and going out? That’s what we’re measuring, that’s one of the things we’re trying to get at.”

The deliverables, she said, are quality data and observations — uncertainties and quality issues duly noted — accessible to climate researchers around the globe to help develop and validate global climate and weather models.

In 2018, 1,173 users either accessed data from ARM, acquired remote access to high-performance computing resources from its data center at Oak Ridge National Laboratory or conducted some level of field work at one of the ARM observatories.

One of those is self-proclaimed power user Dave Turner, manager of NOAA’s Atmospheric Science for Renewable Energy (ASRE) program in its Earth System Research Laboratory, and lead of the Model Assessment Section of the Assimilation Development Branch in the lab’s Global Systems division.

“The challenge is, if they anticipate producing 10 megawatts from solar energy for tomorrow, but tomorrow is cloudy and they only get one megawatt, they still have to figure out how they’re going to supply the other nine,” noted Turner.

Turner is trying to utilize ARM observations, particularly those from the SGP site, to help energy companies create more accurate predictions — understanding how potential cloud properties affect solar energy forecasts, while verifying whether the HRRR accurately predicts those low-level jets across the central plains, which is important from a wind energy perspective.

“The SGP is perhaps the best atmospheric observatory in the world, and I’ve been to many of them,” said Turner. ​“They measure more variables with different instruments and provide a more complete picture of what is happening in the atmosphere than you could find anywhere else.”