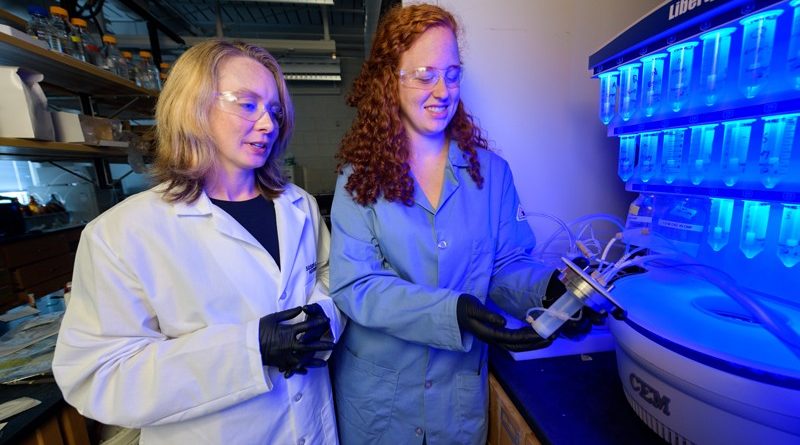 Kloxin, Centennial Career Development Professor of Chemical and Biomolecular Engineering and associate professor of materials science and engineering, is one of 60 researchers from across the country who received the 2019 NIH Director’s New Innovator Award. This award supports unusually innovative research from early career investigators who are within 10 years of their final degree or clinical residency and have not yet received a research project grant or equivalent NIH grant.

“I was honored just to be considered — to actually be selected was a great surprise,” said Kloxin.

Kloxin’s research group works at the interface between engineering, materials and biology and aims to push multiple fields forward in both the design and application of new molecular tools. Kloxin will use her expertise to uncover insights about the intractable problem of idiopathic pulmonary fibrosis, which affects more than 3 million people globally. About two-thirds of patients with this disease die within five years of diagnosis, and while existing pharmaceutical treatments for lung fibrosis can slow down the disease, there is no cure. Despite its devastating effects, the causes of idiopathic pulmonary fibrosis are still undetermined.

“One of the things that motivates the work is that there is limited understanding about the underlying causes of idiopathic lung fibrosis, this essentially uncontrolled wound healing event that just continues to propagate and accumulate scar tissue in the lungs,” said Kloxin. “There’s really little understanding in humans about why that happens and how to stop it.”

Idiopathic pulmonary fibrosis is notoriously difficult to study, which is one reason it is not well understood. Existing model systems, such as animal models, don’t capture the complexities of the human disease. If better systems to study this disease existed, medical experts could develop more effective prevention strategies and lifesaving treatments for patients.

Kloxin plans to use synthetic materials to design a state-of-the-art model system for idiopathic pulmonary fibrosis, one that mimics human lung tissue more closely than existing models. This will allow her and other researchers to glean new insights about how lung fibrosis develops and ultimately, how it might be prevented and treated.

Specifically, Kloxin is developing a dynamic, three-dimensional co-culture model of idiopathic pulmonary fibrosis.  Using synthetic materials, she will mimic the extracellular matrix that surrounds cells. Then, Kloxin will study how changes in the microenvironment surrounding cells such as fibroblasts, epithelial and inflammatory cells — all important to the onset and progression of fibrosis — affects their tendency toward responses that promote fibrosis. The information collected will be compared to pre-clinical models and human data.

To uncover what induces fibrosis, Kloxin aims to develop reporter systems that reveal what, on a genetic level, causes an individual cell to flip into a wound healing state and how that process might be reversed. She also plans to uncover new molecular insights about sex differences in idiopathic pulmonary fibrosis, which strikes more males than females.

The results of this research could have implications for the prevention and treatment of not only idiopathic pulmonary fibrosis, but also other fibrotic diseases.

“The next five years will really be a whole new frontier for us,” said Kloxin.

Kloxin has been thinking about ways to address the challenges associated with studying lung disease since her days as a postdoctoral associate at the University of Colorado, Boulder from 2009 to 2011. There, she studied how cells in the lung that are responsible for regeneration are affected by the environments surrounding them. She found that the effects were more complex than she ever imagined.

Nearly a decade later, Kloxin is still curious about wound healing in lungs — and determined to answer some of the questions that have been bothering her and others.

“When I came here to start my own lab at UD, I started thinking: What other aspects of the lung are not well understood?” she said. “I started digging in to lung fibrosis, and I thought there could be an opportunity to use some of the tools that we had and expand them further for trying to understand not lung regeneration or lung development, which is part of what I was trying to have tools for at Colorado, but now to think about lung disease instead.”

For Kloxin, these challenging problems are highly motivating.

“I am attracted to the complexity of biological systems and like to make things that help solve complex problems,” said Kloxin. “As engineers, we stand to have a unique perspective on these complex systems and then to be able to generate tools to help to reduce down some of that complexity and provide insights.”

Chemical engineering doctoral student Samantha Cassel will help Kloxin with this project. Kloxin will also work with several collaborators at other universities and medical centers as well as within the University of Delaware. Within UD, Kloxin plans to collaborate with two other engineers who study lung tissue and disease: Cathy Fromen, an assistant professor of chemical and biomolecular engineering, and Jason Gleghorn, an assistant professor of biomedical engineering. Kloxin will also work with Wilfred Chen, Gore Professor of Chemical Engineering, who specializes in delivering engineered DNA to cells.

“One of the things that I love about being at UD is that it’s such a collegial and collaborative environment and that we can work together to solve big problems,” said Kloxin.

A history of excellence in biomaterials

Kloxin has attained international renown in the field of biomaterials. Earlier this year, she was selected by the editorial board of Biomaterials Science, a journal published by the Royal Society of Chemistry, for the 2019 Biomaterials Science Lectureship, an annual lectureship that honors an early-career researcher for their significant contribution to the biomaterials field.

Kloxin presented her lecture at a special session of the 30th Annual Conference of the European Society for Biomaterials, held Sept. 9-13, 2019, in Dresden, Germany.

“It was a unique opportunity to share our work with a new audience,” she said. Kloxin described her previous work using peptides — short sequences of amino acids — to develop multiscale structures within synthetic materials, allowing the materials to better mimic those found in human tissues.

The most prevalent protein in the body, collagen, forms long, thin filaments called fibrils, which affect interaction between cells. Those fibrils assemble into rope-like fibers that make tissues in your skin, muscles, heart, and many other parts strong and supple.

Synthetic materials that assemble like collagen could be highly useful to medical researchers who study diseases of myriad human tissues. For one, synthetic tissues could mitigate the problem of batch-to-batch variability that can stymie many researchers who use collagen samples harvested from tissue.

“There are a lot of people who work with collagen harvested from tissues who are doing really cool things with it and would be excited to have alternatives that would lead to less batch-to-batch variability,” said Kloxin. This would allow these researchers to ask different questions about how mechanical properties separate from biochemical cues provide signals to the cells, she said.

However, synthetic versions of collagen typically don’t assemble into long fibrils like the natural protein does.  Those that do often are not stable enough to withstand the cell culture conditions needed to conduct relevant research.

Kloxin has been working on a solution. “We present an approach for locking that assembled structure of those peptides that mimic collagen into place, hopefully providing some new tools with which people can study cells,” said Kloxin.