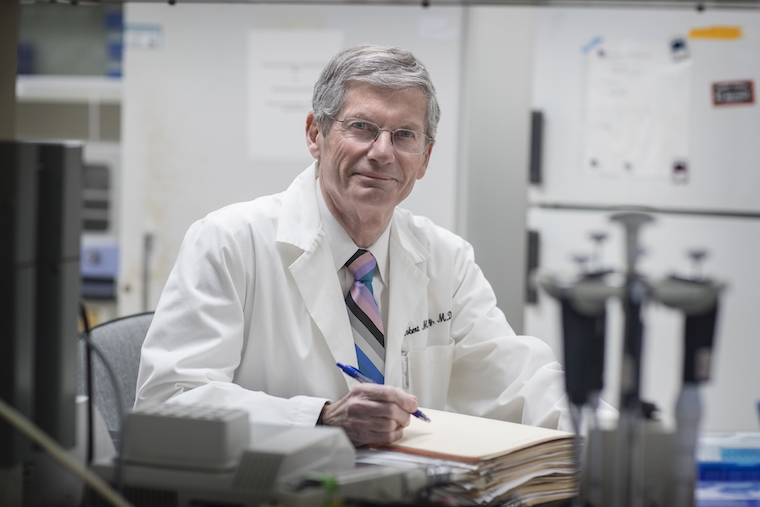 Robert M. Carey, MD, Professor of Medicine at the University of Virginia School of Medicine, has been named a Distinguished Scientist of the American Heart Association for his “extraordinary contributions” to cardiovascular research.

Carey, a former dean of the school, is a leader in the field of cardiovascular endocrinology. He has been studying and treating high blood pressure, or hypertension, for five decades. He also co-led the development of influential new guidelines on high blood pressure issued by the American Heart Association and its collaborating organizations.

“I am most grateful to be receiving this award,” Carey said. “I accept it on behalf of my research staff, postdoctoral fellows and faculty colleagues, whose dedication and commitment to excellence has inspired me continually over the years.”

Over his career, Carey discovered several of the components, mechanisms and actions of the primary hormonal system, the renin-angiotensin-aldosterone system, that regulates blood pressure and hypertension. In particular, he showed how this system regulates the way the kidneys handle sodium (salt).  Inappropriate salt retention by the kidneys is considered a major cause of high blood pressure.

Carey co-chaired the committee that created the guidelines. The group issued important guidance for physicians that helps them prevent and treat high blood pressure. The expanded guidelines help identify people at risk earlier, so they can adopt lifestyle changes that can head off many of the health problems, such as heart attack, heart failure, stroke, dementia and kidney disease, associated with high blood pressure.

All that helps explain why Carey, an endocrinologist, was selected for a lifetime achievement award by the American Heart Association. The award was created by the AHA to recognize “significant, original and sustained scientific contributions that have advanced the Association’s mission, ‘Building healthier lives, free of cardiovascular diseases and stroke.’” Past awardees include several Nobel Laureates in Physiology or Medicine.

Carey will be formally presented with the award at the 2020 AHA Scientific Sessions in November.

“Bob is an outstanding researcher, educator, mentor, leader, role model and advocate for the AHA,” said Zhenqi Liu, MD, chief of UVA’s Division of Endocrinology and Metabolism. “Bob has devoted his life to biomedical research in hypertension but has coupled this with exceptional contributions in many other facets of academic medicine and to several professional societies, including the AHA. His contributions to furthering our understanding of hormonal control of blood pressure and hypertension are widely recognized. He is an exceptional individual and role model.”

Carey retired in 2015 but continues his pioneering research. He remains the School of Medicine’s longest-serving dean, having held the position for 16 years (1986-2002).

During his tenure as dean, he oversaw the creation of the departments of emergency medicine, public health sciences, radiation oncology and physical medicine and rehabilitation. He also expanded many important aspects of the biomedical research enterprise at UVA. In addition, he was an important architect of the culture of interdisciplinary collaboration that is the School of Medicine’s hallmark today.

Prior to becoming dean, he served as chief of UVA’s Division of Endocrinology and Metabolism. His many accolades include receiving the Distinguished Physician Award and Outstanding Leadership Award from the Endocrine Society. He also served as the group’s president from 2008 to 2009.

To keep up with the latest medical research news from UVA, subscribe to the Making of Medicine blog.