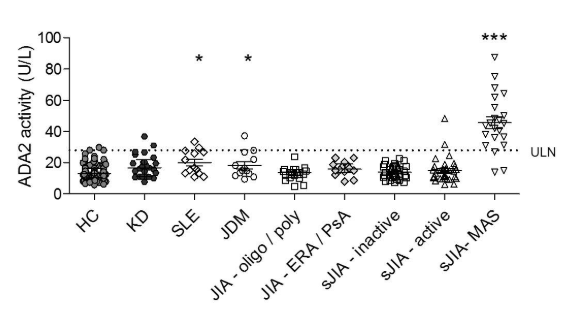 About one child in every 1,000 develops some type of chronic arthritis. These disorders can affect children at any age, although rarely in the first six months of life. It is estimated that around 300,000 children in the United States have been diagnosed with the condition.

Macrophage activation syndrome (MAS) is characterized by a vicious cycle of immune cell activation and dysregulated cytokine production that can result in multi-organ failure and is a life-threatening complication in systemic JIA. Clear biomarkers are needed for prompt diagnosis of MAS to initiate treatment and better understand the pathogenesis of the disease. To address this, a group of researchers conducted a study of peripheral blood ADA2 activity levels to determine if it is a useful biomarker for MAS.

“Children with deficiency of ADA2 are known to develop early onset vasculitis and stroke, but the function of ADA2 and how it is regulated is not entirely clear,” said Pui Y. Lee, MD, PhD, attending physician at Boston Children’s Hospital and one the study’s lead authors. “We conducted this observational study to understand whether ADA2 enzyme levels are different in various childhood rheumatologic diseases. To our surprise, the levels were very high in children with systemic JIA complicated by MAS. It is important to find useful biomarkers for MAS, because many of the existing markers are not very effective in distinguishing MAS from systemic inflammation. Early detection of MAS is extremely important, because mortality of the condition remains quite high and treatment should be started as soon as possible.”

Researchers established normal levels of peripheral blood ADA2 levels in 175 healthy children and compared these values with 25 children with Kawasaki’s disease, 13 with systemic lupus erythematosus (SLE), 13 with juvenile dermatomyositis and 120 with various forms of JIA. While they found mild elevation of ADA2 in some patients with SLE and juvenile dermatomyositis, ADA2 levels that were above the upper limit of normal were largely restricted to children with systemic JIA who had clinically diagnosed MAS.

The study’s results show that in children with active systemic JIA, ADA2 activity beyond the upper limit of normal is strong evidence for concomitant MAS.

“Our findings show that ADA2 is a valuable diagnostic marker to distinguish MAS from other forms of systemic inflammation,” said Dr. Lee. “While there are many markers currently used for evaluation of MAS, many of them lack specificity unless the cut-off is raised significantly to distinguish MAS from general inflammation. In contrast, elevation of ADA2 levels above the normal limit of healthy individuals has good sensitivity and specificity for diagnosing MAS. This is likely related to the biology of ADA2 as a direct product of activated macrophages. It is our hope that ADA2 testing will become more available as a clinical test to help diagnose MAS rapidly, which will, in turn, facilitate treatment initiation and improve patient outcomes.”

This research was supported by funding from the Rheumatology Research Foundation and the NIH’s National Institute of Arthritis and Musculoskeletal and Skin Diseases.

About the ACR/ARP Annual Meeting

The ACR/ARP Annual Meeting is the premier meeting in rheumatology. With more than 450 sessions and thousands of abstracts, it offers a superior combination of basic science, clinical science, tech-med courses, career enhancement education and interactive discussions on improving patient care. For more information about the meeting, visit https://www.rheumatology.org/Annual-Meeting, or join the conversation on Twitter by following the official #ACR19 hashtag.

About the American College of Rheumatology

The American College of Rheumatology (ACR) is an international medical society representing over 8,500 rheumatologists and rheumatology health professionals with a mission to empower rheumatology professionals to excel in their specialty. In doing so, the ACR offers education, research, advocacy and practice management support to help its members continue their innovative work and provide quality patient care. Rheumatologists are experts in the diagnosis, management and treatment of more than 100 different types of arthritis and rheumatic diseases.

Adenosine Deaminase 2 as a Circulating Biomarker of Macrophage Activation Syndrome

Background/Purpose: Macrophage activation syndrome (MAS) is a life-threatening complication of systemic juvenile idiopathic arthritis (sJIA) characterized by a vicious cycle of immune cell activation and dysregulated cytokine production that can result in multi-organ failure. Unambiguous biomarkers of MAS are needed to facilitate prompt diagnosis and treatment, as well as to inform the understanding of disease pathogenesis.

Methods: Adenosine deaminase 2 (ADA2) activity was quantified in peripheral blood using an established spectrophotometric assay in healthy children and in children with a range of inflammatory diseases. Sources of ADA2 and triggers for its release were explored using cytokine stimulation of peripheral blood mononuclear cells, flow cytometry, and confocal microscopy of MAS bone marrow.

Results: We established normal levels of peripheral blood ADA2 levels in 175 healthy children and compared these values with Kawasaki disease (KD; n = 25), systemic lupus erythematosus (SLE; n = 13), juvenile dermatomyositis (JDM; n = 13) and multiple forms of juvenile idiopathic arthritis (JIA; n = 120). Aside from mild elevation in some patients with SLE and JDM, levels of ADA2 levels above the upper limit of normal were largely restricted to sJIA patients with clinically diagnosed MAS (Figure 1). In two independent sJIA cohorts, ADA2 activity beyond the upper limit of normal effectively distinguished MAS from active sJIA without MAS, with combined sensitivity = 86% and specificity = 93%. Longitudinal analysis of several patients with sJIA/MAS showed normalization of ADA2 levels with resolution of MAS. In sJIA patients, ADA2 levels correlated closely with other biomarkers of MAS including ferritin, interleukin (IL)-18, and the interferon (IFN)-γ-inducible chemokine CXCL9.  In peripheral blood mononuclear cells, ADA2 was strongly induced by IL-12, IL-18 and IFN-γ. Monocytes were the primary ADA2 source in peripheral blood, with hemophagocytes a prominent source of ADA2 in MAS bone marrow as assessed by confocal microscopy.

Conclusions: ADA2 in the peripheral blood is a sensitive and specific biomarker of MAS, reflecting the activation status of monocytes, macrophages, and potentially hemophagocytes. In patients with active sJIA, ADA2 activity beyond the upper limit of normal represents strong evidence for concomitant MAS and could potentially help guide clinical care.