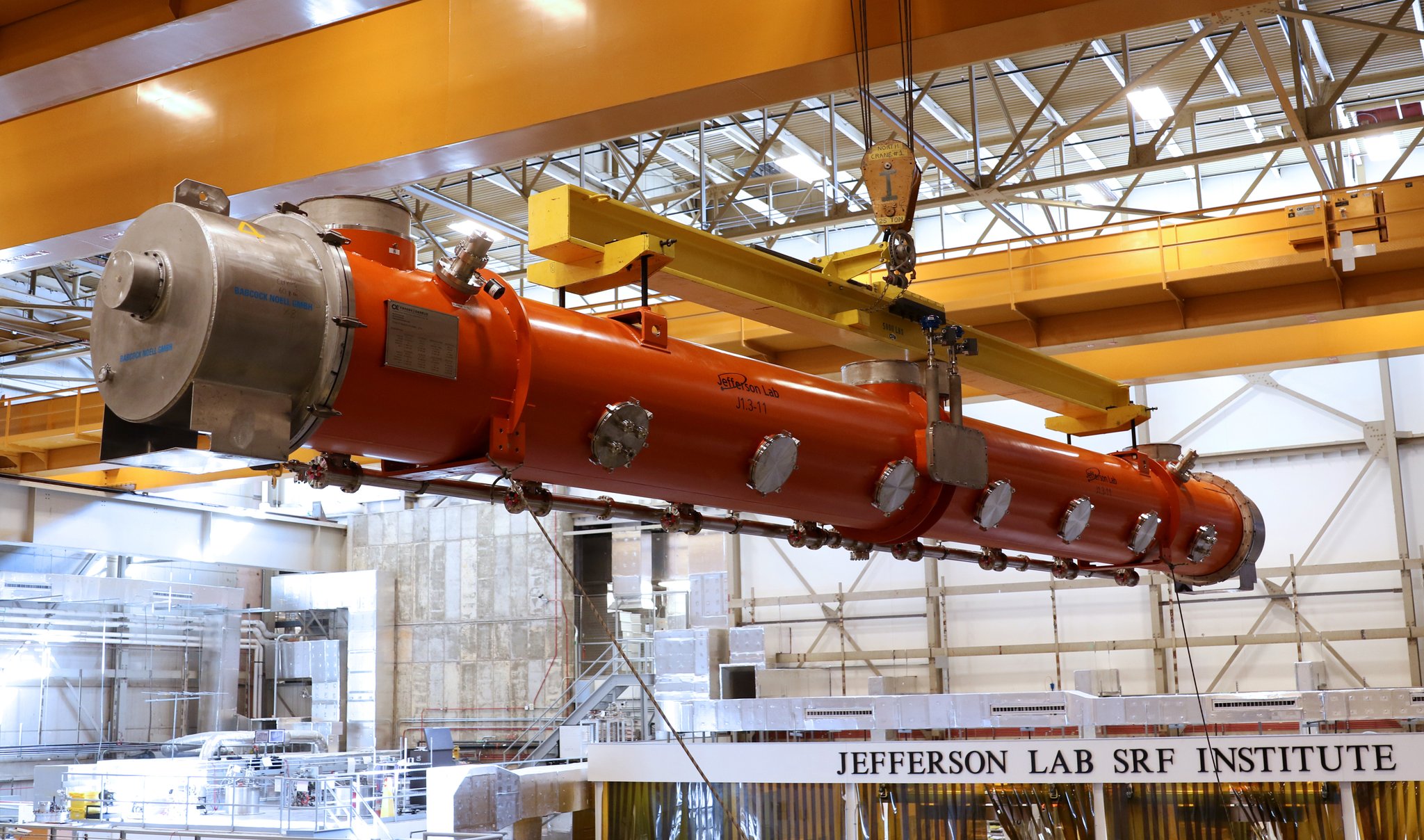 NEWPORT NEWS, VA – Today, the U.S. Department of Energy’s Thomas Jefferson National Accelerator Facility has shipped the final new section of accelerator that it has built for an upgrade of the Linac Coherent Light Source (LCLS). The section of accelerator, called a cryomodule, has begun a cross-country road trip to DOE’s SLAC National Accelerator Laboratory, where it will be installed in LCLS-II, the world’s brightest X-ray laser.

“This is the culmination of seven years of work,” said Naeem Huque, the cost account manager who led the cryomodule efforts at Jefferson Lab. “A lot of the staff in Jefferson Lab’s Superconducting Radiofrequency Institute came in right from the start of the project, and they’re still here seeing it off. We are happy to see this project conclude successfully.”

LCLS-II is a project to upgrade the existing Linac Coherent Light Source (LCLS), the world’s first X-ray free-electron laser. The X-ray pulses generated by the machine act like a powerful microscope, allowing researchers to watch chemical reactions in real time, probe materials and more. Once complete, LCLS-II will begin its reign as the biggest and brightest X-ray free-electron laser in the world.

LCLS-II will provide even better resolution than the original LCLS, which accelerated electrons at room temperature and generated 120 X-ray laser pulses per second. The upgraded machine will accelerate electrons at superconducting temperatures to generate 1 million X-ray laser pulses per second. Jefferson Lab is a key contributor to the upgrade project, providing a total of 21 cryomodules for the new superconducting portion of LCLS-II since work began in 2013.

The superconducting accelerator that will power the upgraded machine is made up of cryomodules. Electrons zip through the cryomodules, where they are loaded up with extra energy. Then, magnets make the electrons zigzag to give off their energy as X-rays. The upgraded LCLS will boast 37 cryomodules in total. Of those,18 are from Jefferson Lab (plus three spares), and the rest will come from Fermilab, another key contributor.

“The LCLS-II cryomodules are the highest-performing cryomodules that anybody has ever built,” said Joe Preble, senior team leader for the LCLS-II project at Jefferson Lab. “We pushed out the performance frontier on this sort of technology and turned it into a regular, turnkey process.”

Jefferson Lab is a world leader in superconducting radiofrequency accelerator technologies and is home to the first large-scale SRF accelerator. As the team at Jefferson Lab contributed to the design of, built, tested and shipped these record-breaking cryomodules for LCLS-II, they encountered unprecedented challenges to push the cryomodule technology’s performance.

“These very high-performing cryomodules are sensitive to things that we never had to worry about before, like our assembly procedures, the way we treat materials, the way we build things,” Preble said.

Jefferson Lab modified its facilities to accommodate the cryomodules, which were a different shape and size than those that came before. Jefferson Lab staff members even figured out a new way to ship the finished cryomodules, after some broke during shipment.

“We explored a lot of different options, everything from hiring a NASA aircraft to take it over there, to trying to send it by train or ship,” Huque explained.

In the end, they managed to improve safety without pulling the cryomodules off the road. Sitting in a bed of springs to prevent damage from jostling, Jefferson Lab’s newly shipped cryomodule will travel almost 3,000 miles to its home in the LCLS-II linear accelerator in Menlo Park, California, over the course of 72 hours.

However, Jefferson Lab’s work on improving the LCLS is likely not yet done. Another upgrade to this accelerator may be on the horizon: LCLS-II HE (High Energy). If that project is greenlighted, Jefferson Lab will build between 10 and 13 more cryomodules with a newer procedure. It’s expected that those cryomodules will have even better performance than the 21 they just finished.

“I think that’s one of the biggest signs that we’ve done really well, is that something that was already ambitious is now getting pushed even further,” Huque said. The HE upgrade, which is the culmination of work by staff at both Jefferson lab and Fermilab, will dramatically increase the performance capabilities of LCLS-II.”

For now, this momentous final delivery closes the book on Jefferson Lab’s part in delivering new cryomodules for LCLS-II while the R&D and prototyping for HE is already ongoing. Its conclusion comes thanks to the help of many.

“From the procurement people to the engineers, the scientists, the technicians, and the administrators, it’s taken everybody working together across laboratories to get this done,” Preble said. “It’s a great success and demonstration of the way the DOE needs to continue to work in building these new big projects.”

The LCLS-II project is being developed and built for SLAC by a multi-lab collaboration that includes four other DOE national labs: Jefferson Lab, Argonne National Lab, Berkeley Lab and Fermilab, along with additional collaboration from Cornell University. Jefferson Lab is providing the liquid helium cryogenics plant for the project, half of the SRF cryomodules and the systems that will allow its operators to control the cryomodules. Once complete, LCLS-II will be the longest continuous SRF linear accelerator in the country, boasting 280 accelerating cavities.