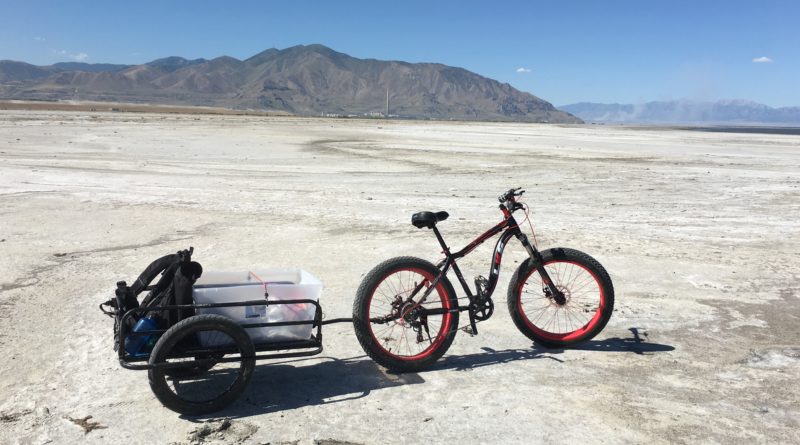 The flat dry lakebed (also called a playa) surrounding Utah’s Great Salt Lake is more than 750 square miles—an area bigger than Houston. The wide-open landscape is surprisingly varied and is the realm of coyotes, bison, and a few hardy plants. It’s probably safe to say that no one knows the Great Salt Lake playa better than University of Utah atmospheric scientist Kevin Perry.

From June 2016 to August 2018, Perry traversed the playa by bike, researching how it contributes to dust in the Salt Lake Valley’s air. In a report prepared for the Utah Department of Natural Resources and Utah Division of Facilities Construction and Management, Perry details the current dust source regions on the playa and explains how declining lake levels, as well as damage to the playa, could make the problem worse.

“A lot of the lake is being protected by a relatively fragile crust,” Perry says. “Only 9% of the lake right now is blowing dust. If the crust were to erode or be destroyed, then a maximum of 22% of the lake would actually have enough silt and clay particles to become dust sources. We know where those sources are. We know what needs to be protected.”

Perry has decades of experience studying how dust is transported through the air. He first delved into the topic as a postdoctoral researcher at the University of California at Davis where he used National Park Service measurements of particle composition to prove that high concentrations of mineral dust in the air over the eastern United States during summer originated from Africa. Later, he used these same techniques to track Asian dust originating in the Gobi and Taklamakan deserts as it traversed the Pacific Ocean. “As I’ve lived here in Utah longer,” he says, “I eventually became more interested in the local dust sources.” As the Great Salt Lake water level has declined from its historic high in the 1980s, more and more of the playa is exposed to wind, and dust storms in the Salt Lake Valley have become more frequent. Perry secured funding to study the playa, determine where the dust was coming from and analyze the sources to see if elements present in the dust might pose a health hazard to Wasatch Front residents.

Perry decided he would traverse the playa on a preset grid system, to make sure he wasn’t biased in selecting sampling locations, and to ensure he captured the different kinds of terrain present on the lakebed. He also decided that he would do the survey by himself and do it on a bicycle.

Biking had practical advantages—it was far less costly than operating an ATV, and was much less likely to damage the playa surface. Also, bicycles don’t get stuck in the mud as much as ATVs—Perry says it took him all of 20 minutes to free the bike in his worst incidence of getting stuck.

But Perry also had personal reasons for choosing a bicycle. “I turned 50 during the experiment,” he says, and biking allowed him to revisit his preferred mode of transit for many years when he was younger. “I felt like this was probably my last chance to go do something to really push myself physically,” he says.

So, on days that he wasn’t teaching, including weekends and summers, Perry set off on his bike, trailer in tow, to survey the playa. His colleagues were a bit skeptical. “They thought I was crazy,” Perry says. “They said, ‘Why would you spend two years of your life doing this?’”

But once he got past the edges of the playa, everything, including the bugs, went quiet and he found a terrain full of surprising variation. “You could look 15 yards off to the right and it would look very different than where you’re standing,” he says.

He used a classification system to describe each location. Was there vegetation? How thick was the surface crust and how erodible was it? Were there any other features, such as mineral crystals, sand dunes or, cryptically, rocks with long trails in the playa suggesting they had moved over time? He also took samples to take back to the lab and analyze for percentages of silt and clay.

Perry saw wildlife too: porcupines, pelicans, coyotes, bison—even the tracks of a cougar. “They come out onto the lake bed looking for things,” he says, “I don’t know what they’re looking for, but I was just amazed by the variety in the wildlife that I saw.”

Only about a quarter of the lakebed could potentially generate dust, Perry found. That’s because most of it is covered with a crust that prevents the wind from lofting the dust and carrying it into the Salt Lake Valley. Vegetation, when it is present, can also help to anchor the dust.

How did Perry determine if a location was generating dust? Active dust sources were identified as areas with little or no vegetation, no crust or an erodible shallow crust, and high silt and clay fractions. The “boot test” —kicking the ground several times to see if the surface was susceptible to wind erosion—was a great way to identify these spots in the field. Four dust-generating hotspots were identified: the extreme northwest corner of the playa, the northern Bear River Bay area, Farmington Bay east of Antelope Island and Carrington Bay, on the west shore.

“We now know the elevation of all of those dust sources,” Perry says. “In Farmington Bay, if the lake level were increased to 4,200 feet, it would cover up 75% of the dust hotspots.” Conversely, further reductions in lake levels will likely expose more dust-generating regions. And destruction of the crust—by ATV activity, for example, would further expand the dust sources.

Perry also analyzed the soil samples for elemental composition to see if dust from the playa might possibly be carrying toxic heavy metals. For most elements, the soil contained too little to be of any health concern. Perry did find elevated levels of arsenic in the soil, but it’s not clear yet how frequently Salt Lake Valley residents are exposed to the dust.

The expansive data set Perry brought off the playa has other applications as well. Researchers studying the effects of dust on snowpack in Utah’s mountains can use the chemical signatures in soil samples to determine where the dust comes from. Ecologists can assess the effects of both nutrients and toxic elements in dust on near and distant ecosystems. And dust can now become part of the conversation about conserving and protecting the Great Salt Lake.

“I started off as a scientist and I’m starting to feel more like an advocate for preservation of the lake,” Perry says. “Most people think that any water that goes into the lake is wasted water because it turns salty and we can’t drink it or use it through irrigation. So, there’s this mindset locally that we should use all the water before it gets to the lake because once it gets to the lake, it’s useless.” But each drop, he says, adds to the unique interconnected environment supported by the waters of the Great Salt Lake.

“I’ll look back on this project with fondness,” Perry says. “While you’re actually doing it, it’s hot, it’s unpleasant, it’s a lot of physical work. But just knowing that there’s this resource out there that we need to protect—I’m glad I’ve done it.”