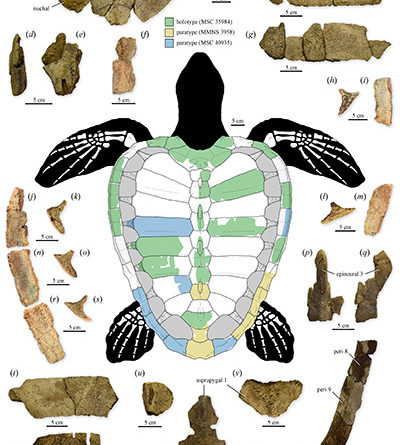 BIRMINGHAM, Ala. — Paleontologists in Alabama have announced the discovery of a new genus and species of fossil sea turtle that may fill an important gap in the evolution of sea turtles.

Scientists named the animal Asmodochelys parhami for Asmodeus, a deity that, according to Islamic lore, was entombed in stone at the bottom of the sea, and ‘parhami’ in honor of James F. Parham, former curator of Paleontology at the Alabama Museum of Natural History, for his many contributions to Alabama paleontology.

According to the study, Asmodochelys parhami swam the oceans approximately 75 million years ago and may have been one of the most recent common ancestors of modern sea turtles.

“The origin story of sea turtles is one of the great unsolved mysteries in evolutionary biology,” said Drew Gentry, a College of Arts and Sciences Ph.D. candidate at the University of Alabama at Birmingham and lead author of the study. “There is a great deal of evidence indicating that turtles may have evolved to live in the ocean several times over the past 150 million years. The trick is determining which of those species are actually the direct ancestors of the species we see today.”

To determine how A. parhami is related to present-day sea turtles, scientists performed a phylogenetic analysis. It is a method that compares the features of many different species of turtle to figure out how closely or distantly related those species may be. The analysis results in a phylogenetic tree, or genealogy, of sea turtles.

According to the results of the study, A. parhami is one of the youngest species to fall just outside of the group containing every species of modern sea turtle. This makes A. parhami of particular interest in the study of the sea turtle origins.

“Although it’s tempting to say ‘problem solved’ when we recover such a well resolved tree, this is only one hypothesis in a long line of suggested sea turtle genealogies,” Gentry said. “Right now, there are several distinct trees proposed by different groups of scientists that are the front-runners in the race to solve sea turtle evolution, each with its own unique arrangement of fossil and modern species. Determining which tree most accurately represents the evolutionary history of these animals can be challenging, to say the least.”

In an effort to test the accuracy of each tree, Gentry and his colleagues examined which of the currently proposed sea turtle genealogies most accurately fits the fossil record. That is to say, if the genealogy indicates that a certain species evolved first, does that species actually show up first in the fossil record?

Surprisingly, Gentry discovered that, although his proposed genealogy matched up relatively well with the fossil record, it was not the best fit. “Actually, a phylogeny proposed more than a decade ago matched nearly perfectly with the fossil record,” Gentry said. “The problem with that analysis was that it didn’t include nearly as many species as subsequent analyses, which may have influenced the results.”

Despite scientists around the world working on the problem of sea turtle evolution for more than a century, Gentry thinks there is still much to be learned.

“New methods for testing how fossil species are related to modern species are constantly being developed. Also, discoveries of new fossils have the potential to radically change our understanding of how certain features and species evolved in the history of life on our planet,” Gentry said. “Our study is just another piece of evidence in an ongoing mystery that shows no sign of being solved any time soon.”

Known for its innovative and interdisciplinary approach to education at both the graduate and undergraduate levels, the University of Alabama at Birmingham is an internationally renowned research university and academic medical center, as well as Alabama’s largest employer, with some 23,000 employees, and has an annual economic impact exceeding $7 billion on the state. The five pillars of UAB’s mission include education, research, patient care, community service and economic development. UAB is a two-time recipient of the prestigious Center for Translational Science Award. Learn more at www.uab.edu.